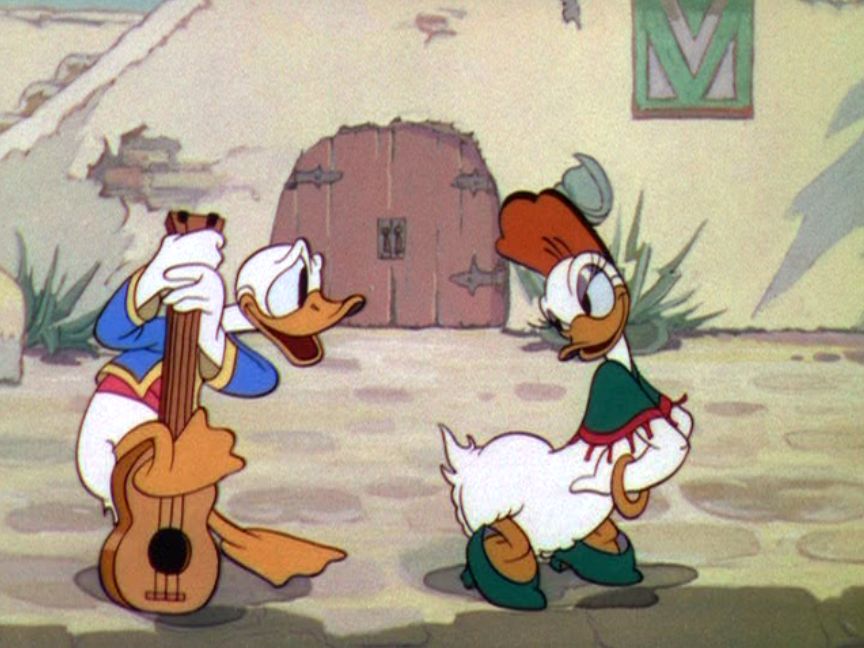 Nowadays, it seems like whenever the name “Donald” comes up, two figures flash in one’s mind. One is a selfish, impulsive blockhead with a dangerously bad temperament. The other is a cartoon duck in a sailor outfit.

Unsurprisingly, today we’ll be taking a look at that second, far more sober-minded figure, Donald Duck. This time, however, Donald’s trading in his trademark sailor outfit in exchange for a mariachi getup for his solo cartoon series debut, “Don Donald.” 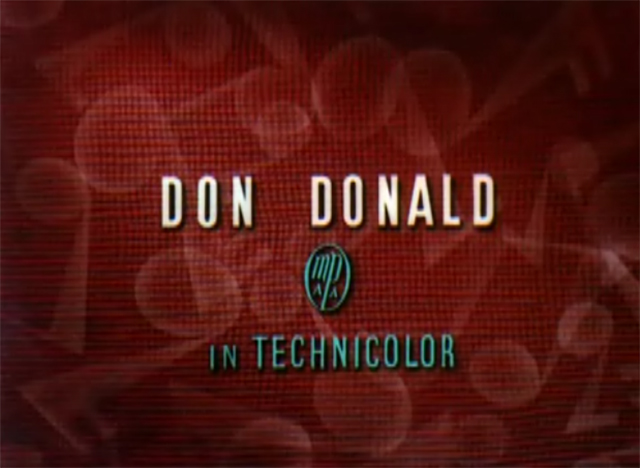 Released in 1937, “Don Donald” finds our titular hero and his free-spirited donkey cruising into a Mexican town to take Daisy Duck out on a ride through the country. After the donkey knocks Daisy off humiliating her, her inner rage erupts and quickly overmatches Donald’s own flared temper! Dejected, Donald attempts to woo her back by trading in his crestfallen donkey for a sports car. The plan works until the car breaks down, again knocking Daisy off into a mud pit. Daisy’s wrath at her peak, she attacks Donald with a horn before stranding him in the desert, riding off with a unicycle packed in her purse!

Although Donald was the last of the Fab Five Disney characters to make his debut, his quick rise in popularity was staggering, prompting his own solo series well before the likes of Pluto and even Goofy (Minnie Mouse was the only member who never headlined her own). The Duck’s series not only outpaced Mickey‘s but soon dominated the Disney animated shorts whilst also propelling him to many feature film appearances, from his first cameo in The Reluctant Dragon to his starring roles in Saludos Amigos and, more famously, The Three Caballeros – two more South-of-the-Border trips for the gibberish-lingual duck.

His solo debut in “Don Donald” is as fast-paced and hilarious as one would expect from the ever-exasperated duck, pitting him against his ultimate romantic foe, Daisy. Just as Minnie was introduced in the first Mickey cartoon, “Steamboat Willie” (or “Plane Crazy” depending on your point of view), “Don Donald” establishes Daisy as Donald’s significant female other. Though the character would evolve into a more composed, but still occasionally inflammable Southern belle in later appearances, here she is a firebrand – a devastating quacking-force to be reckoned with!

Christened here as “Donna Duck,” similar to how Goofy was first introduced as “Dippy Dawg,” Daisy is perhaps the least developed of the original classic Disney characters. Oft overlooked, she never really had much to do other than frustrate Donald with her feminine wiles. Compared to the more sweet, sedate Minnie, however, she had far more potential for physical comedy and hysterical outbursts rendering her a rare highlight whenever showcased properly such as in “Donald’s Double Trouble” (1946) and especially in “Donald’s Dilemma” (1947), her sole starring role (a short that should’ve rightfully been called “Daisy’s Dilemma” but that’s a nitpick for another Default Disney article).

Also squaring off against Donald is his donkey – perhaps the only creature almost as stubborn as Donald himself. The perfect counter to the obstinate duck, this pairing would be repeated again in future shorts. Of course, Donald being teamed up with a donkey also made available other delicious comic possibilities such as Donald angrily calling him a “jackass!” Your life isn’t complete until you have heard these foul words spouted out of an infuriated, um, fowl’s mouth!


Naturally, this joke doesn’t end there with one scene plainly featuring an immense close up of the donkey’s, err, well see for yourself.

Once again serving as another example of Walt Disney‘s particular penchant for posterior related humor, this theme would find its perfect vessel in Donald Duck, being featured in many of his appearances (he is, undisputedly, the literal butt of many of the jokes). From Daisy, whose derrière amusingly puffs up like a dress and gets stuck in a sombrero, to Donald landing on a cactus, these gags hardly ever fail in Donald’s capable hands, or more accurately, tail feathers.

Overall, “Don Donald” is the perfect debut vehicle for Donald’s long-running solo series and one of the best. The jokes land, the characters are engaging (even if they are punching, kicking, and generally battering each other half-the-time), and the situations are altogether creative, taking a rather simple story and expanding it into comic gold as only an angry duck in the Mexican desert can.

The first thing one might notice in many prints of this official Donald Duck series debut is the opening billing:

Originally tagged as a Mickey Mouse short despite the rodent’s absence, “Don Donald” would later be retconned with the proper billing in future releases.

And speaking of early installments, do all the Disney characters need to start their careers in South America? After all, Mickey’s second appearance similarly had him riding into a South American town to woo Minnie in “The Gallopin’ Gaucho” (1928) and, heck, even Goofy’s third starring short, “Baggage Buster” (1941), had him bull-fighting! Coincidence, or a Disney animator conspiracy for free inspirational Mexican vacations?

Funny enough, through hours of painstaking market research into the matter (a.k.a. a five minute Google search), I have discovered that trading a donkey for an old-broken down sports car may not be as far-fetched as the short may imply. The average donkey can cost upwards of about $2,500 (or roughly $150 in 1937 if inflation rates remain constant), not too far off from a used car one can find on Craigslist. If anything else, Donald unearthed quite the bargain! Yes, Hilarity by Default – your number one online source for jackass sales figures from the last century! 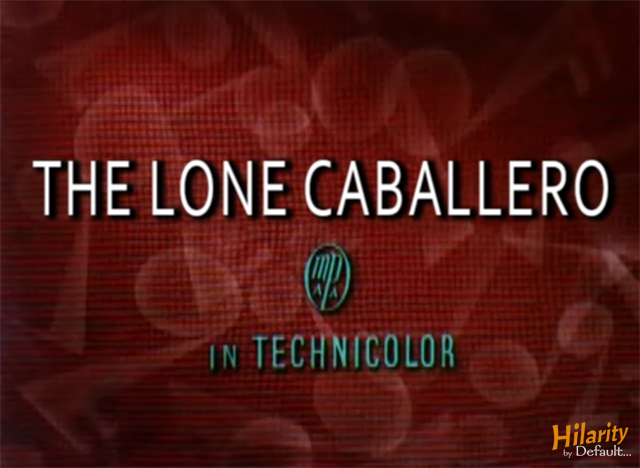 Next time, Donald is joined by Goofy and Walt Disney himself in the South-of-the-Border animated travelogue, Saludos Amigos – Disney’s 6th animated feature. Haven’t heard of it? There may be a reason… For more Default Disney, click here.