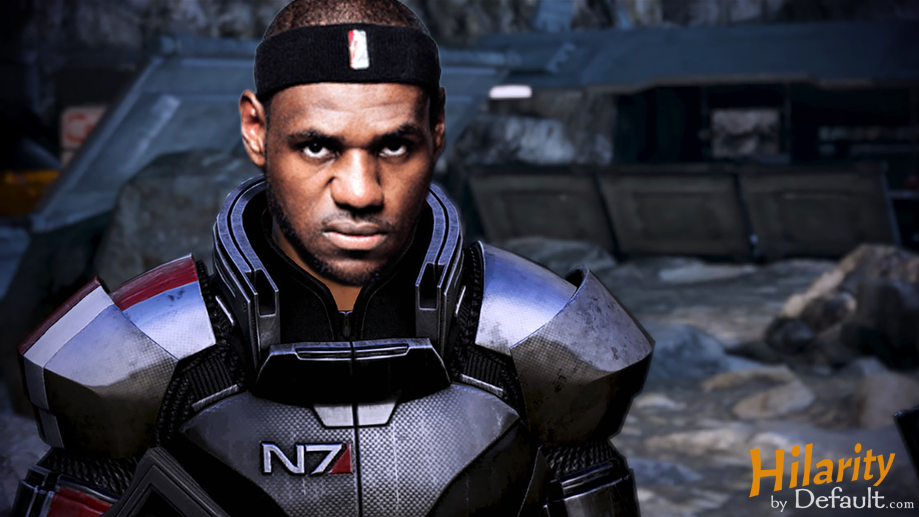 There’s few that question LeBron James is the current generation’s foremost NBA player on Earth. It’s also likely true that he is the best in the galaxy and possibly even the universe. He’s maintained a legendary level of play for years while performing with different allies on more than one team. He has eventually become the unquestioned leader of whatever team he’s playing for. In many cases, battling overwhelming odds to accomplish more than many others could with similar odds stacked against them.  While the man they called “King” James didn’t always overcome every single opponent, he and his squad were never counted out until the very end.  To me, this sounds exactly like the dossier for the first video game-based Sports Fan’s Guide to Nerd Culture (co-produced by Hilarity by Default & BreakTheFourth.com). I give you none other than Commander Shepard from the BioWare’s famed sci-fi role-playing video game series, Mass Effect.

Both entities open their careers representing their “homes” within their professions.  While James, as a high school graduate from Akron Ohio, was selected by the Cleveland Cavaliers in the 2003 NBA Draft, Shepard joined the Systems Alliance Military and at age 29 was assigned as the executive officer of the SSV Normandy reporting as the second-in-command to Captain David Anderson.


The Systems Alliance is the representative body of Earth and all its stellar colonies within the ME universe. Anderson is a legendary soldier with the Alliance military in the same way that Michael Jordan was a legend in the NBA. The passing of the torch from Anderson to Shepard is similar in a way to Lebron ascending shortly after Jordan retired as a Washington Wizard.


Struggles in dealing with leadership between their respective organizations is also a common thread between the two individuals.  Commander Shepard found himself several times at odds with the Citadel Council, a parliamentary government made of multiple alien species (excluding humans and other races who are relatively newer at space travel) throughout the first three installments of the ME franchise.


Much like Cleveland Cavaliers owner Dan Gilbert drafted Lebron as a high school graduate, the Council appointed the Commander as the first human spectre. A spectre is a special military operative who acts under the authority of the Council. The antagonist in the first Mass Effect game was Saren Arterius.  Ruthless and determined, he was the longest standing specter the Council.  Known for doing whatever it took to win, it’s not a stretch to compare Saren to a fellow NBA Super Star of James’ era, Kobe Bryant.


While Shepard found himself chasing Saren throughout the first game, he came across evidence that a race of sentient machines, the Reapers, were responsible for obliterating a technologically advanced species known as the Protheans 50,000 years ago and were soon due to return to lay waste to intelligent life once more.  No matter how much evidence that Shepard provided the Council, they would provide him with little help.

Now I’m not trying to say that James was in any way capable of saving the universe as a space fighter, but it was true to say that he was his team’s single greatest hope on the hardwood on more than one occasion much like Shepard was in his cause.  Much of that in his first stint with the Cavs was thanks to Gilbert refusing to give him help despite the superstar lifting his team to the 2007 NBA Finals where they would be swept by swept by the San Antonio Spurs.  It seems very similar to tracking down Saren with a legion of artificially intelligent robots at his command known as the Geth who “worshiped” the Reapers. Then after that beating impossible odds by defeating them only to fail to convince the Council to get resources to battle a race bent on keeping intelligent life in check.

In the opening of the second installment of Mass Effect, Shepard and his crew on the SSV Normandy were out trying to find more evidence of Geth and Reaper activity when the ship was attacked and destroyed by a technologically advanced ship — a perfect metaphor for the Cavaliers six-game elimination from the second round of the playoffs by a then-superior team in the Boston Celtics in 2010. Before Mass Effect 2 was released in that very same year, news leaked that Commander Shepard would be killed during the game’s prologue. ME fans were in a state of suspense much like sports fans were captivated by the buzz of what is now known in King James career simply as “The Decision”.


During a 75-minute television special on ESPN just two months after being ousted from the NBA Playoffs, Lebron notoriously announced that he would be “taking his talents to South Beach” and joining Miami Heat together with Dwayne Wade and Chris Bosh to make up their “BigThree”. This was orchestrated by Miami’s historically crafty and cunning team GM and former head coach Pat Riley.  There are many that even still mark this as the worst decision that James has made in his career.  Not necessarily for dividends it rendered him on the court, but as a failure in public relations as far as making himself the NBA fans’ latest villain in the eyes of the public.


While Shepard didn’t have as much choice in the matter, the Commander would be brought back to life a great expense to a different “team” to the surprise of gamers everywhere. It would turn out that another cunning front office leader would recruit him in similar fashion along with others to defeat both the latest threat to humanity.  This individual, known only in the story as the Illusive Man,  was the leader of a “human-survivalist” paramilitary group known as Cerberus. The mission of this group was to raise humanity to their most advanced position in the universe no matter the means.  This extremist point of view garnered a negative perception not only of the organization, but Shepard himself.


Joining the Heat was just as controversial to basketball fans as Shepard’s new employer was to his former crew members.  Seeing their former commanding officer cruise around aboard another ship, the Normandy SR-2, in Cerberus colors drew feelings of ire and betrayal.  That being said, I don’t think it led to any burnt jerseys within the ranks of the Systems Alliance military.


As a much anger as it drew from both their followers, the results of either entity can’t be denied.  While there were challenges along the way, both Lebron James and Commander Shepard dealt their first biggest blows in advancing their cause towards victory.


While with the Heat, James chalked up his first two NBA Championships in four trips to the NBA Finals including one against the team that had swept him in Cleveland, the Spurs.  With Cerberus, Shepard defeated the Collectors, an alien race that made up of Protheans who were found by the Reapers that were then engineered into genetically-altered insectoids.  The Collectors were designed as workers and soldiers whose mission was to build a humanoid Reaper to serve as the spearhead to an invasion.  This effort was also thwarted by Shepard and his Cerberus team.


Eventually, loyalty to their origins sent our two feature subjects back to where their legacies began.  Lebron James returned to his native state of Ohio to bring his hometown fans in Akron an NBA title while Commander Shepard returned to the Alliance military to better protect humankind and all races.


During his second stint as a Cavalier, LBJ was centrally involved with recruiting other teammates including Kyrie Irving and Kevin Love and others to build a team to compete against another force had broken records for regular season wins, the Golden State Warriors.  In the third installment of Mass Effect, Shepard brought together governments of multiple planets and races to face the Reapers in a unified front.


While Commander Shepard’s story arc concludes at this point, it’s possible for a Mass Effect player to get an ending that isn’t necessarily “happy”.  In that instance, Kevin Durant going to the Golden State Warriors after the Cavaliers win their first ring could very well be an instance where Lebron James is facing a “bad ending” to his Cleveland storyline.

While Lebron has struggled to bring home a fourth title, all fans can hope for is that his move to the Los Angeles Lakers for the 2018–2019 Season goes better than BioWare’s launch Mass Effect: Andromeda.  This continuation of the ME universe is landing with the same success rate similar to Lavar Ball’s Big Baller Brand apparel company. . . All talk and hype with very little to actually offer.