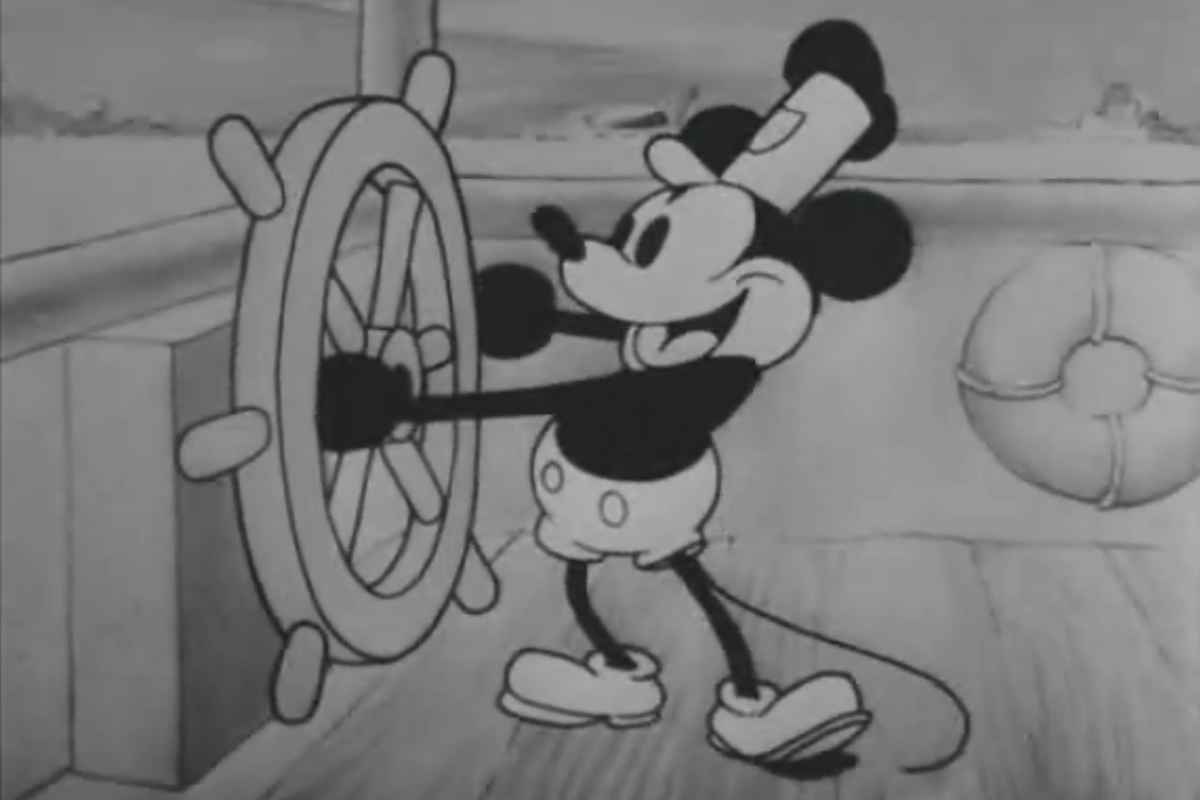 To kick off our Default look at the Disney films and shorts, we go back to the one that started it all, 1928’s “Steamboat Willie.” But first…

Having started his animation career in Kansas City, Missouri, with his moderately popular Laugh-O-Gram short cartoons, Walt Disney, along with the talented cartoonist Ub Iwerks, ventured to Hollywood where they found success producing the “Alice Comedies” series in 1923. Featuring a combination of live-action and animation, the “Alice Comedies” provided Walt with enough clout to be hired by Universal Studios in 1927 to produce a new series, the lucrative “Oswald the Lucky Rabbit.” When negotiating a pay raise the following year, Walt was blackballed by the studio resulting in the loss of both his contract and the character of Oswald (who had been trademarked by Universal).

Following the loss of his most popular creation, Walt, along with a few remaining loyal animators, collaborated with Ub Iwerks to develop a new character which Disney would own independently – a character that would go on to inhabit short cartoons, films, television, records, cities, countless watches, and costumed terrors in theme parks around the world – Mickey Mouse.

“Steamboat Willie” is famous for two particular reasons – it was the first sound cartoon and the first Mickey Mouse cartoon. Funny, because neither happens to be true. In fact, Mickey had first appeared in two originally silent shorts, “Plane Crazy” and “The Gallopin’ Gaucho,” with the former having been screened several months prior finding neither success nor distribution (both would later be reworked with sound following “Willie’s” popularity). While it’s also true that there had been other cartoons released with synchronized sound prior to “Willie,” it was the first to utilize this technology with a memorable and rewarding outcome. 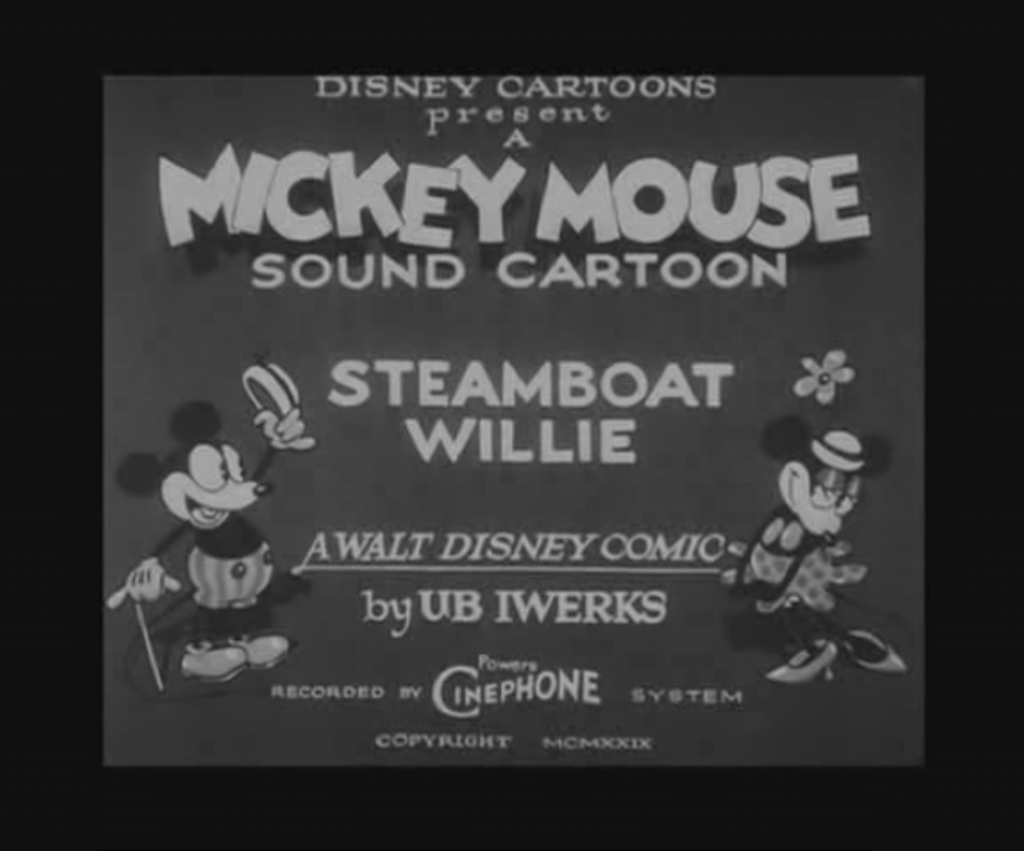 “Willie,” which was partially inspired by Buster Keaton’s Steamboat Bill (although they have little in common), has Mickey serving aboard a steamboat under the draconian captaincy of Pete the cat. After loading the boat with livestock and (literally) picking up a passenger, Minnie Mouse, Mickey breaks out into improvised musical numbers employing various objects and animals scattered about as instruments. Highlights include Mickey using a goose as a makeshift bagpipe… 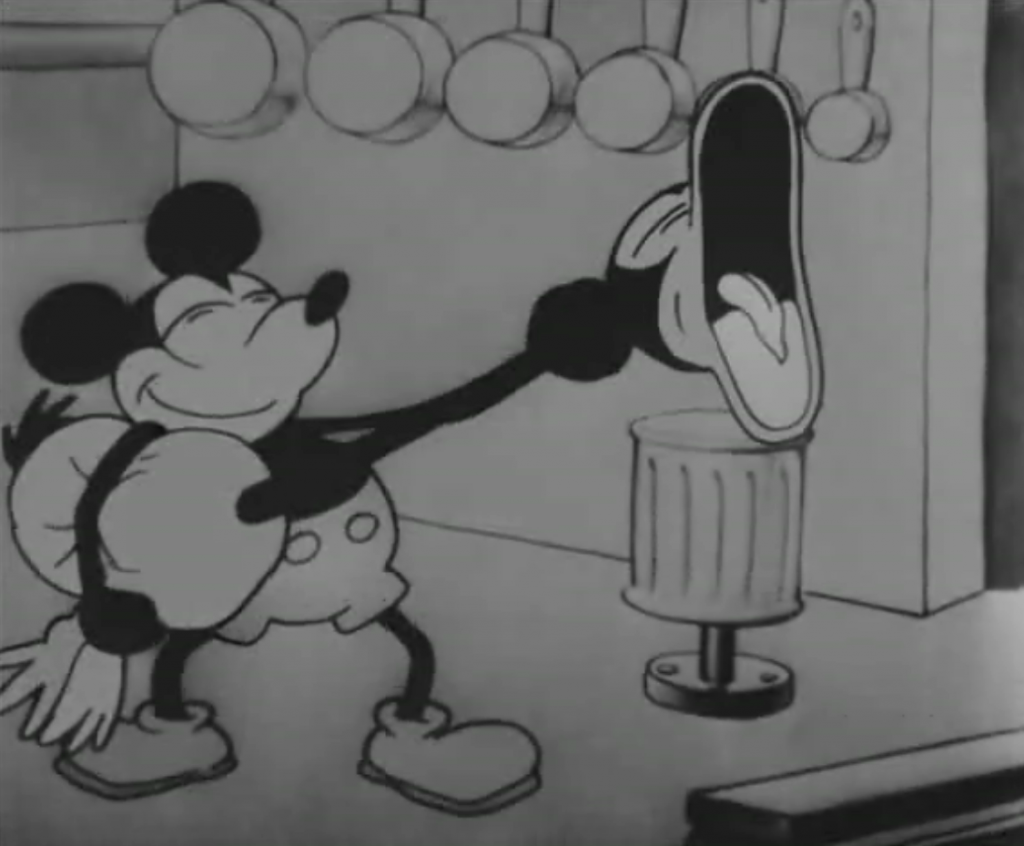 …and, disturbingly, kicking a suckling piglet off his nursing mother so that he can use her, um, body as a piano accordion.

The short ends with Pete discovering Mickey’s careless frivolity and forcing him to work in the galley. Upon peeling a couple of potatoes, the Mouse notices the one ship animal to escape his wrath, a sniggering parrot, whom he knocks out the ship’s porthole, laughing at the bird’s drowning cries!

While much of the humor is clearly at odds with today’s sensibilities, it certainly wasn’t meant to be malicious at the time. In fact, the irreverence found in these old Disney shorts can be quite off-putting to modern audiences accustomed to Disney’s usual whitewashed, pixie-satiated facade. Despite this, the sheer inventiveness and energy in the short delighted audiences and helped it endure beyond a simple showcase for synchronized sound technology.

Yet as revolutionary as “Steamboat Willie” was, the Mickey Mouse cartoons themselves hadn’t completely broken free from their “Alice Comedies” and “Oswald the Lucky Rabbit” roots as evidenced by the recycling of a few ideas and jokes. Most notable was the exact duplication of a gag from Oswald’s “Rival Romeos” (also released in 1928). It features a goat swallowing a musical instrument, having it bounce inside his body, and then, with a crank of his tail, playing music out of his mouth like a gramophone.

1927’s “Alice the Whaler” also bears a few similarities such as its focus on a cartoon mouse (complete with shorts) forced to slice potatoes by an oppressive cat on a whaling ship.

However, Mickey had already begun to evolve from his first outings in “Plane Crazy” and “The Gallopin’ Gaucho.” Besides being completely free from the rodent-like bug-eyes that he had in his previous appearances, here Mickey displays a much more likable and relatable identity.

No longer the lecherous character who forced himself on Minnie in “Plane” or the drinking and smoking swashbuckler of “Gaucho,” Mickey is instead portrayed with the much more carefree and harmonious attitude that would endear him to the world. Perhaps it was the addition of sound that helped galvanize the character with an added dose of charm. Either way, the end result was an enormous success with the crux being that the Mickey, as introduced in this short, was not simply a rubbery cartoon effect. He was a personality and the key to all of Walt’s future achievements for decades to come. As Walt was fond as saying, it all started with a mouse. 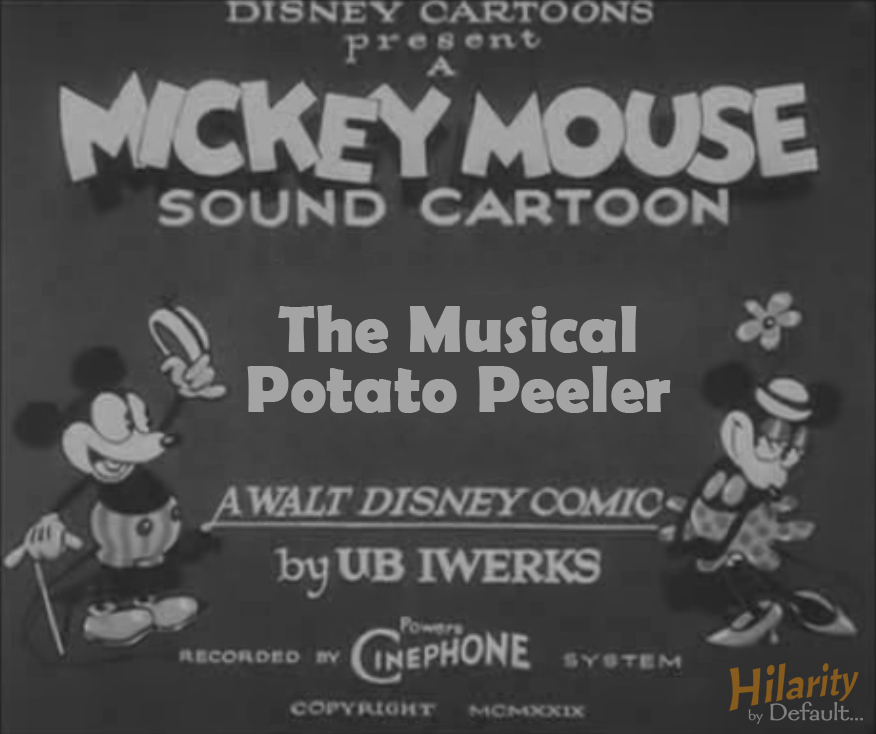 Join us next time as we take a look at another Disney milestone – Snow White and the Seven Dwarfs (1937). For more Default Disney, click here.