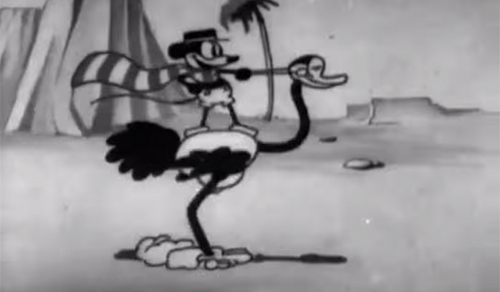 “The Gallopin’ Gaucho” was Mickey Mouse’s second onscreen adventure – that is, it was the second Mickey cartoon animated after the first, “Plane Crazy,” failed to gain a distribution deal. Both projects, originally completed as silent films, were shelved until Walt Disney found his footing with his third attempt, “Steamboat Willie,” which was produced as a sound cartoon to critical acclaim. Following this success, Walt had both earlier efforts retrofitted with sound and released in the following months.

“Gaucho” saw Mickey already beginning to evolve from the lecherous scamp of “Plane Crazy” to the genial character that would endure in the loving imaginations of children for generations as the ultimate paragon of morality, virtue, humility, and…

Inspired by Douglas Fairbanks’s The Gaucho (1927), the short opens with El Gaucho Mickey riding through the pampas atop his faithful rhea. They make a pit stop at Cantino Argentino where Mickey spots Minnie Mouse performing a tantalizing number for the drunken patronage. No sooner has he had a chance to woo her via tango when she’s kidnapped by the vicious Black Pete. Mickey darts off to her rescue and after a swashbuckling sword fight, he defeats Pete with a bed pan and rides off to the sunset with a grateful Minnie.

It’s interesting to note the development of Mickey between his appearances in the first three shorts as Walt was experimenting with finding the right characterization for the mouse to distinguish him from his previous work with Oswald the Lucky Rabbit. Mickey is almost completely different in each outing from the mischievous hooligan of “Plane Crazy” to the heroic scoundrel in “Gaucho” and, finally, to the delightful underdog of “Steamboat Willie.”

Although “Gaucho” is the first to show traces of Mickey’s final form, he lacks the vulnerability that humanized him in his later more successful appearances. Rather, he’s atypically brash and scandalous. After all, his El Gaucho persona is an outlaw as per the “Rewardo” posters that can be seen in the cantina; however, it is an enjoyable and rare treat to see a more Han Solo-ish take on the character and it gives “Gaucho” an edge that you don’t often see in Mickey cartoons.

“Gaucho” builds on the positive strengths of its predecessor, mixing a dash of its irreverent and inventive humor with a stronger (although admittedly simple) plot. The gags are sharper and more clever with highlights that include Mickey and Minnie’s physics-defying tango and a hilarious chase scene involving his boozed up rhea.

The animation is also much more stylish and detailed compared to “Crazy” with Mickey’s character design seeing definitive improvements. Although he starts off with the bug-eyed design of “Crazy,” halfway through the film he converts to his more familiar button-eye design found in “Steamboat Willie.”

All in all, “The Gallopin’ Gaucho” remains one of the strongest of Mickey’s earlier endeavors. Featuring a vivacious energy, gags that hardly ever miss their mark, and a tighter plot, “Gaucho” is not only an important step in the evolution of Mickey Mouse but an entertaining diversion as well.

“The Gallopin’ Gaucho” shows its roots as a silent cartoon in more ways than its counterpart, “Plane Crazy.” Being more plot heavy than the visual antics of “Crazy,” the short features many instances of simple dialogue, music, or sound effects literally being spelled out on screen. However, it doesn’t detract from the quality of the short overall and it provides an interesting glimpse into how this short would’ve looked if it was released as originally intended.

Some trivia: although this is technically Black Pete’s (better known as Peg-Leg Pete in most of the shorts of this era) first appearance in a Mickey Mouse cartoon, he had already made his debut three years earlier in “Alice Solves the Puzzle” (pictured below) – one of Disney’s Alice Comedies episodes. This marks him as the oldest continuing Disney character! 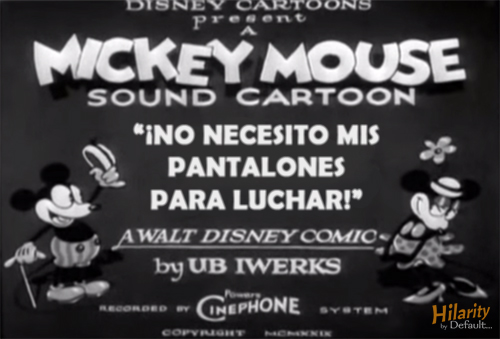 Join us next time when we venture into an “unauthorized” tour of the Disney Studios with The Reluctant Dragon. Haven’t heard of it before? Well it features Walt Disney himself, an effeminate dragon, and a diaper-clad baby Einstein – now that is a recipe for success, right? For more Default Disney, click here.