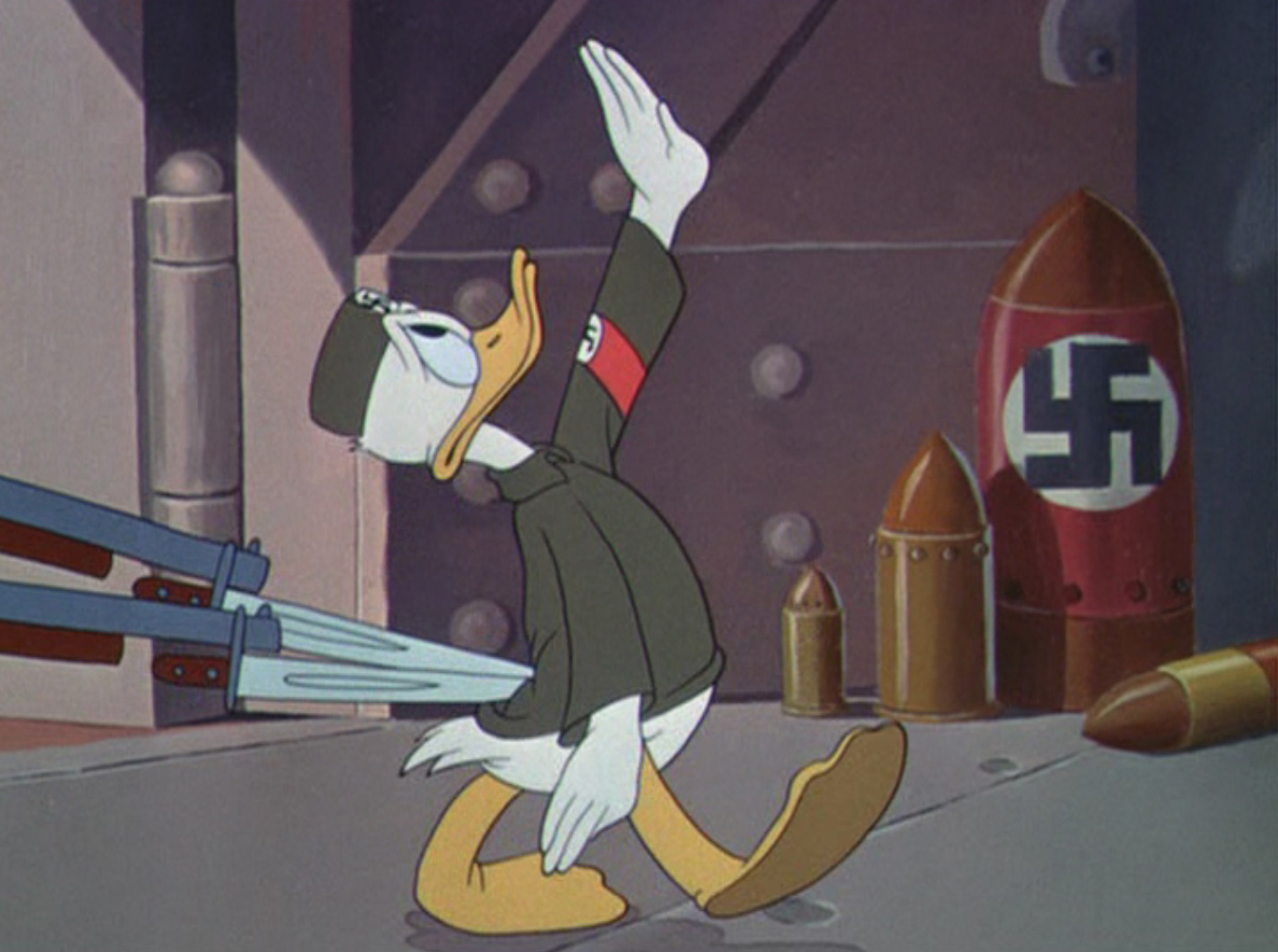 Also known as “Donald Duck in Nutzi Land,” “Der Fuehrer’s Face” was a sensation in 1943 becoming the most infamous of Disney‘s World War II propaganda shorts and it’s easy to see why. It’s downright hilarious, subverting Nazi-terror with absurdity reminiscent of Charlie Chaplin’s The Great Dictator. Following the war, the short disappeared from the Disney roster for being one of their most notoriously politically incorrect productions.

Thankfully, in recent years Disney has made this short available along a plethora of other World War II propaganda features that include the animated film Victory Through Air Power. They are fascinating to watch, providing some edgy material not normally associated with the habitually conservative Disney Studios. 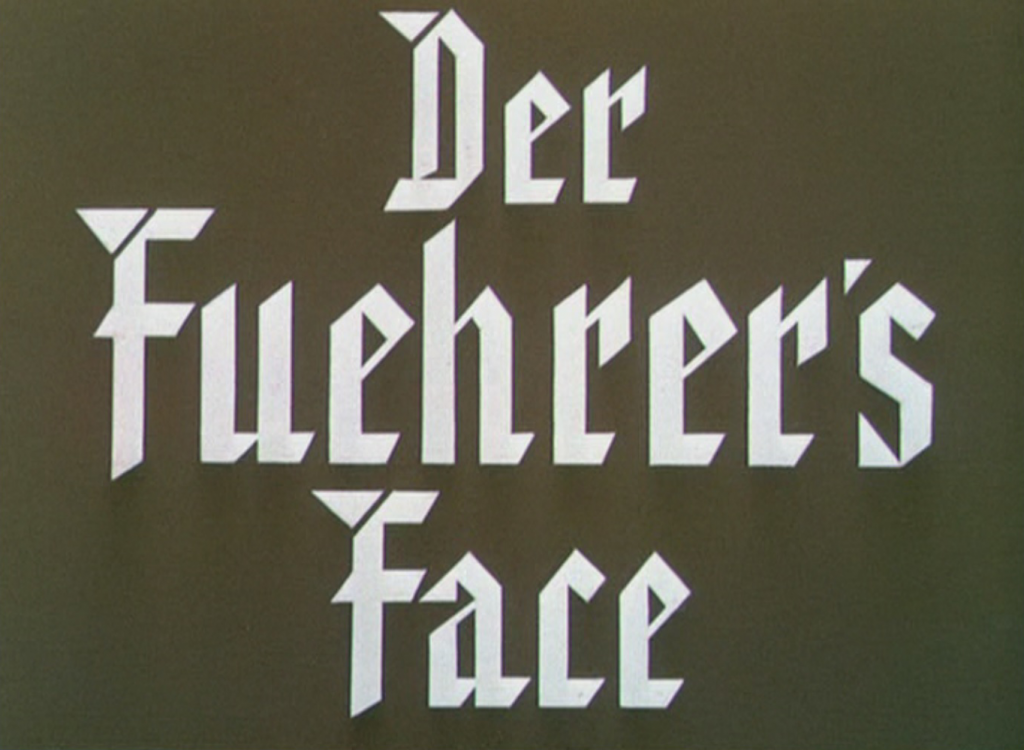 “Der Fuehrer’s Face” may be the single, most quintessential example of propaganda in film. Every inch of frame is peppered with multifarious allegories that help define its pressing message, whether it’s the countless swastikas strewn throughout the art design…

…or the notably brilliant “Heil Sweet Heil” picture frame over Donald Duck‘s bed. What’s more prominent is the deluge of comedic “heil Hitlers” spoken throughout the short (heard about 33½ times according to the IMDb).

The film opens with a marching Nazi group singing the short’s namesake song, “Der Fuehrer’s Face.” Lampooning the Axis powers through their ignorant bravado and temperament, the song is quite clever while also providing the cartoon with a memorable score.

As the group marches past a small residence, we experience a “typical” day in the life of Nazi Donald Duck. From his routine morning hails…

…to his pathetic breakfast which consists of a single coffee bean and a breath-full of “aroma de bacon & eggs.” After “improving the mind” with a reading of Mein Kampf, he is literally marched off to his day job: running an assembly line in an artillery factory. There, he’s forced to twist the shells of the various bullets and bombs that come through in a scene that once again pays homage to Charlie Chaplin (in this case, his excellent Modern Times). Its most hilarious conceit is that along with the parade of shells on the assembly line, pictures of Adolf Hitler also come through prompting an exasperated Donald to try and keep up with all his hails!

As the torturous, identity-crushing subjugation of Donald reaches its peak, he loses his mind as a nightmare overcomes him in the vein of “Pink Elephants on Parade” from Dumbo. This time, however, the pink elephants have been supplanted by Hitler and anthropoid Nazi artillery (this may be the the strangest sentence I have ever typed).

With an explosion of artillery signalling the end of a brutal nightmare, we find Donald waking up in the most gaudily patriotic bedroom in the history of America. Heck, the White House is less nationalistic when set side by side with this bedroom! Certainly done to offset all the swastikas and hellish scenery with the good ol’ red, white, and blue, the short concludes with Donald hugging his Statue of Liberty replica. As he breathes a sigh of relief, the Duck states what may be the most intelligible statement ever to come out of his incomprehensible mouth, “Am I glad to be a citizen of the United States of America!”

While “Der Fuehrer’s Face” falls a tad short with a somewhat nonsensical (although surprisingly effective) nightmare sequence, any shortcomings are nullified with its abundance of tenacity and wit. Winning the Academy Award for Best Animated Short Film that year (the only Donald Duck cartoon to do so), it’s no surprise that there was a public outcry for Disney to release the film in recent years. It is not only the best Donald Duck cartoon but, as indicated before, it may serve to be the exemplification of wartime propaganda through film. It’s masterful in its subtext and equally side-splitting moreover. 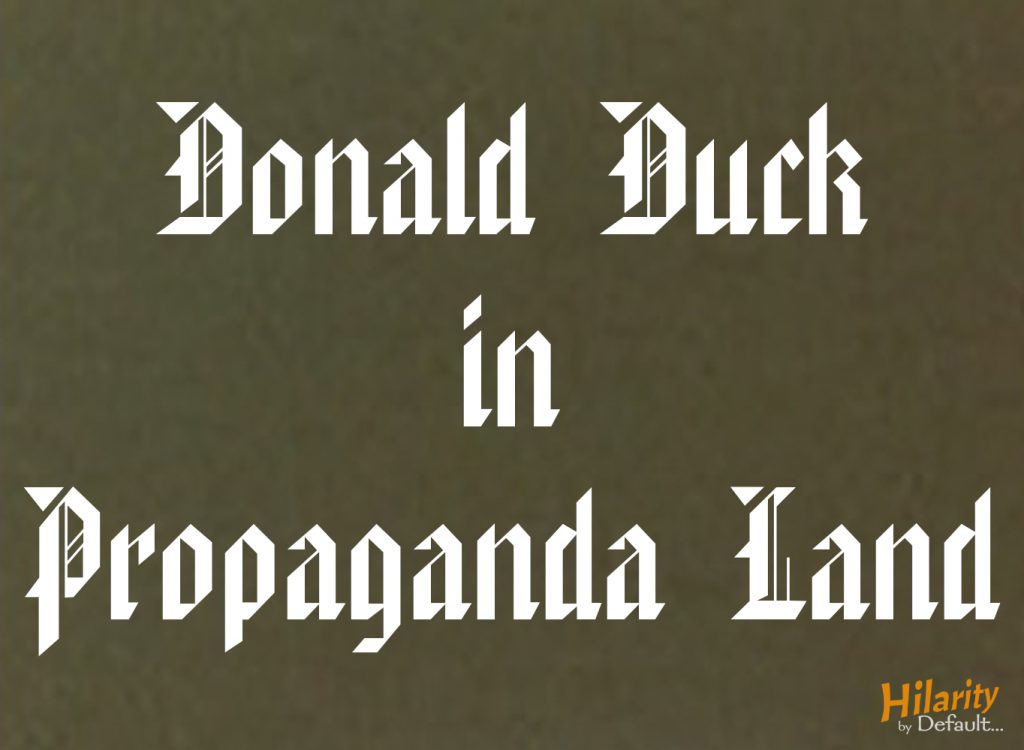 Next time, Disney goes to battle once again with one of Walt‘s most unique and overlooked animated films, Victory Through Air Power. For more Default Disney, click here.