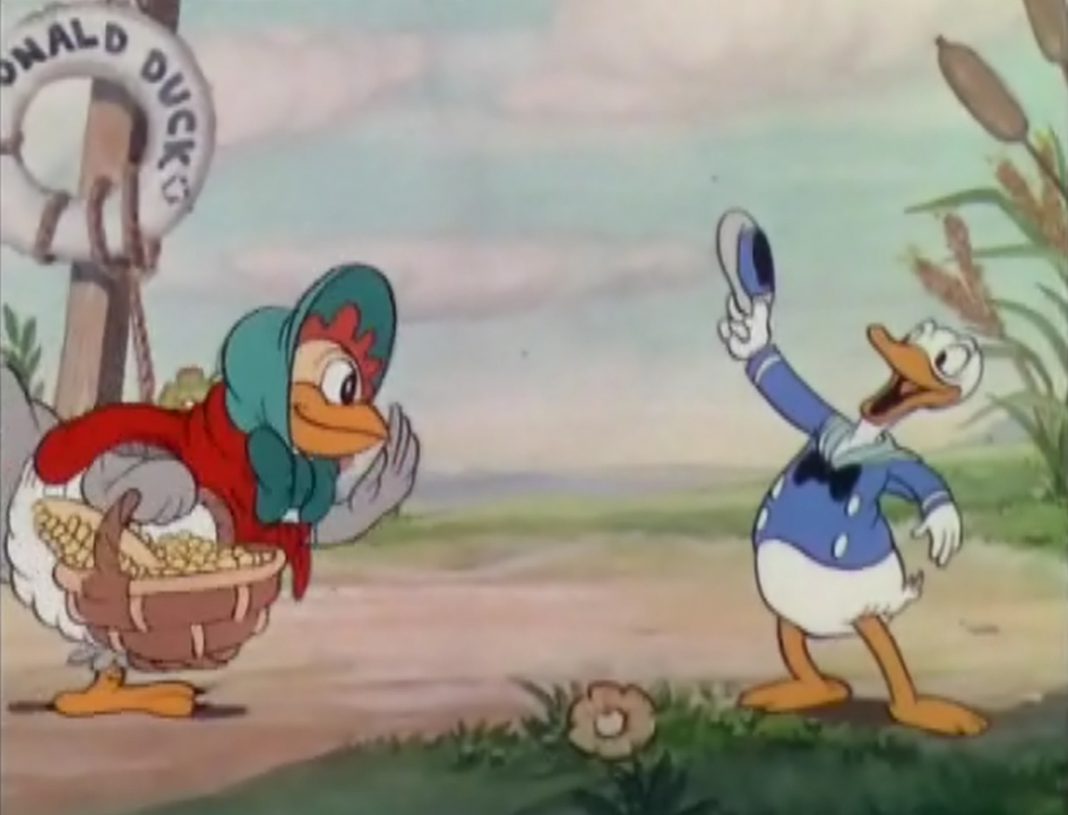 At first glance, “The Wise Little Hen” may seem like a typical Silly Symphony release – yet another musical retelling of a famous fairy tale or fable. Unlike many of the most well-known Symphonies, there’s nothing technically pioneering in “Hen” other than one major historical footnote – the introduction of Donald Duck.

Donald was the last of the Disney Fab Five characters to make his debut (the other four being, of course, Mickey & Minnie Mouse, Goofy, and Pluto) and was the only one to make his first appearance in color. Introduced more or less with personality fully intact (minus his short fuse which would be set off in his next short, “Orphan’s Benefit”), it’s not hard to see how he became a break out star, quickly achieving popularity that would soon overshadow the Mouse himself! 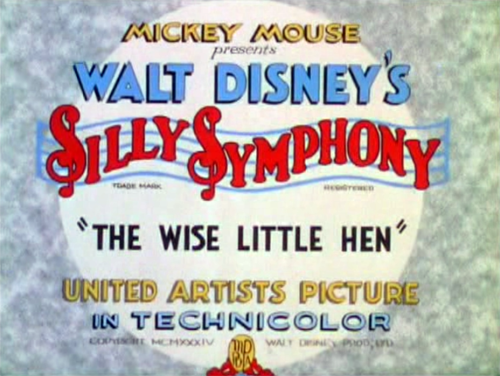 Serving as a straightforward adaptation of “The Little Red Hen” morality tale, Disney‘s “The Wise Little Hen” focuses on a motherly chicken and her flock of chicks seeking help planting corn. After being rejected by the freewheeling Peter Pig and Donald Duck with the ludicrous excuse of a shared tummy ache, she and her chicks resolve to do the work themselves leading to a tremendous harvest. After again being rejected by the pair who have been wasting their time singing and dancing at an Idle Hour Club, the Hen family harvests and cooks a delicious feast. With their tummy aches suddenly vanishing, the pig and the duck are aghast when the hen offers them castor oil as a comeuppance for their laziness. As the (suddenly gluttonous) chickens guzzle down a truckload of corn products, Peter and Donald pathetically kick each other in despair.

Donald was the only of the Fab Five not to make his debut in a Mickey Mouse cartoon. In fact, he’s a bit underplayed in “The Wise Little Hen” with the short showcasing Peter Pig as the dominant comedic character; yet, besides his oinking voice and concertina playing, there’s not much more to the pig (he would only make two more minuscule appearances in “The Band Concert” in 1935 and a cameo in Who Framed Roger Rabbit). Contrarily, the moment Donald makes his entrance, he leaves a definite impact. Everything from his trademark voice to sailor outfit mark him as a creative achievement. Though his design would become sleeker and his temperament hotter later on, his first appearance, in hindsight, doesn’t ring false as opposed to Mickey’s early progression (compare the lecherous, almost rapey Mickey from “Plane Crazy,” for example, to the Mickey that we now know and love).

Much (arguably most) of Donald’s success can be attributed to the great Clarence Nash who would go on to voice the character for a half century (1983’s “Mickey’s Christmas Carol” would serve as his final time in the role). Nash’s unique, wonderfully incomprehensible duck imitation is an absolute riot and breathes an instantly recognizable quality to the character.

In addition to Nash (who also performed as Peter Pig), “The Wise Little Hen” features the voice talents of Florence Gill as the hen herself. Better known for her portrayal of Clara Cluck, Gill’s idiosyncratic musical squawking makes her the perfect animal foil to Nash (their live appearance together serving as one of the few high points of The Reluctant Dragon seven years later).

Nash and Gill are really what make “The Wise Little Hen” a standout. Besides the creative character performances, there’s really nothing particularly exceptional about the short which is about as routine a retelling of a fable as the Silly Symphonies would get. On the other hand, I don’t think there’s ever been a depiction of corn as tantalizing in the history of motion pictures!

Just why does the wise little hen need help planting and harvesting her corn anyway? She has a whole troop of loyalist farmer chicks at her disposal, not to mention that the corn stalks literally sprout fully formed in a manner of seconds! Does she really need the help of Donald Duck and Peter Pig, or was this just a guise to cruelly deprive them of a corn feast – a feast big enough to feed an army (as the short’s song lyrics suggest).

On closer inspection, she seems rather plump for a desperate farmer begging her neighbors for help. I mean, just look at that feast! It has more selections than a farmers’ market buffet! Does the moral of the story suggest gluttony as an equitable substitution for laziness?

Not to mention that if the hen genuinely needed help with her corn farm, why was she wasting time with a pig and a duck when she could have been asking her mate? After all, those chicks didn’t come out of nowhere! Is he an absentee rooster? Is the underlying tragedy of “The Wise Little Hen” a subtle allegory of a single mother abandoned by her mate? Is this why she secretly maintains resentment towards Peter and Donald for their utter lack of responsibility, a visual metaphor for her husband’s wantonness? 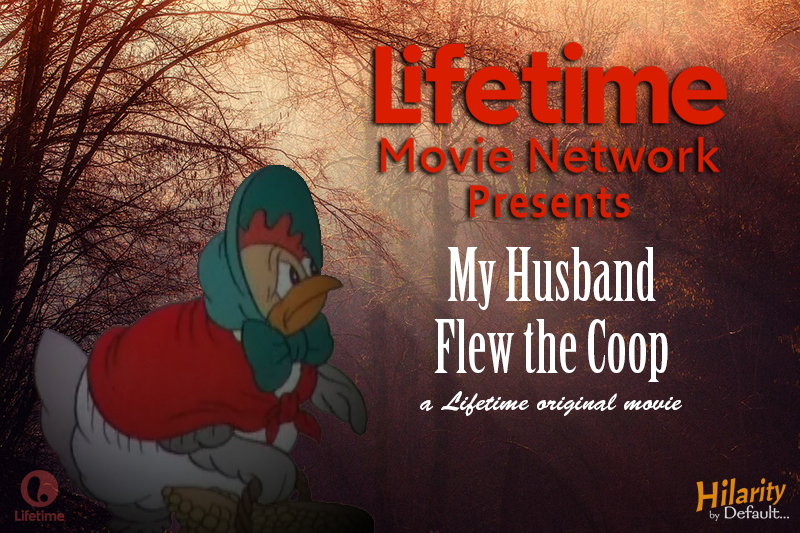 Truly, “The Wise Little Hen” has deep, unforeseen layers that explore the blight of the human condition. Well, either that or I’m reading too much into it. 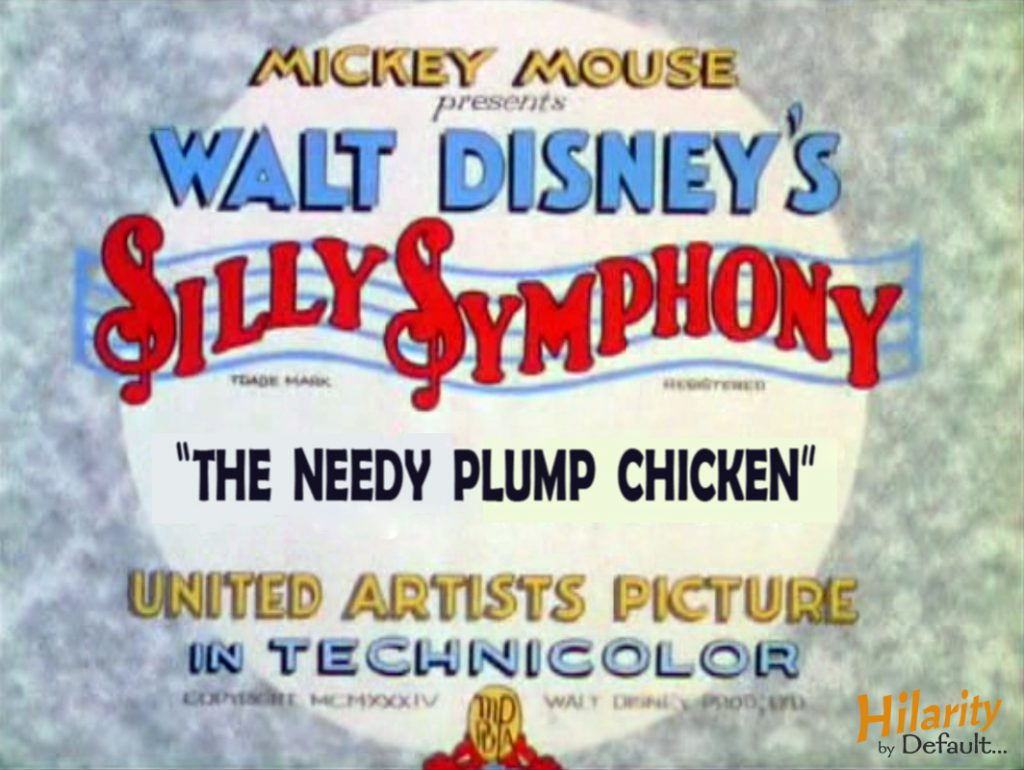 Next time, we’ll return with one of the most beautifully animated films Walt Disney ever produced. It is the coming-of-age story of a young prince who, after one of his parents is killed, learns to have reverence for the great circle of life with the companionship of his childhood sweetheart and his faithful animal friends. Of course, I’m talking about The Lion King Bambi. For more Default Disney, click here.