Since his final regular short was released in 1953 (“The Simple Things”), Mickey Mouse has only made sporadic appearances in films outside of television, theme parks, and direct-to-video features. Only three more Mickey-centric shorts have been released theatrically since then – “Mickey’s Christmas Carol” (1983), “The Prince and the Pauper” (1990), and “Runaway Brain” (1995). Now, nearly twenty years later, the Mouse has returned – and seemingly in glorious black & white no less!

Promoted as a long, lost 1920’s era Mickey cartoon, “Get a Horse!” begins amicably enough with Mickey joining Horace Horsecollar‘s rollicking hay wagon for a musical romp. Soon, Minnie Mouse joins in attracting the insatiable lust of the villainous Peg-Leg Pete who has been caught in traffic behind the slow moving wagon in a “contemporary” motor vehicle. 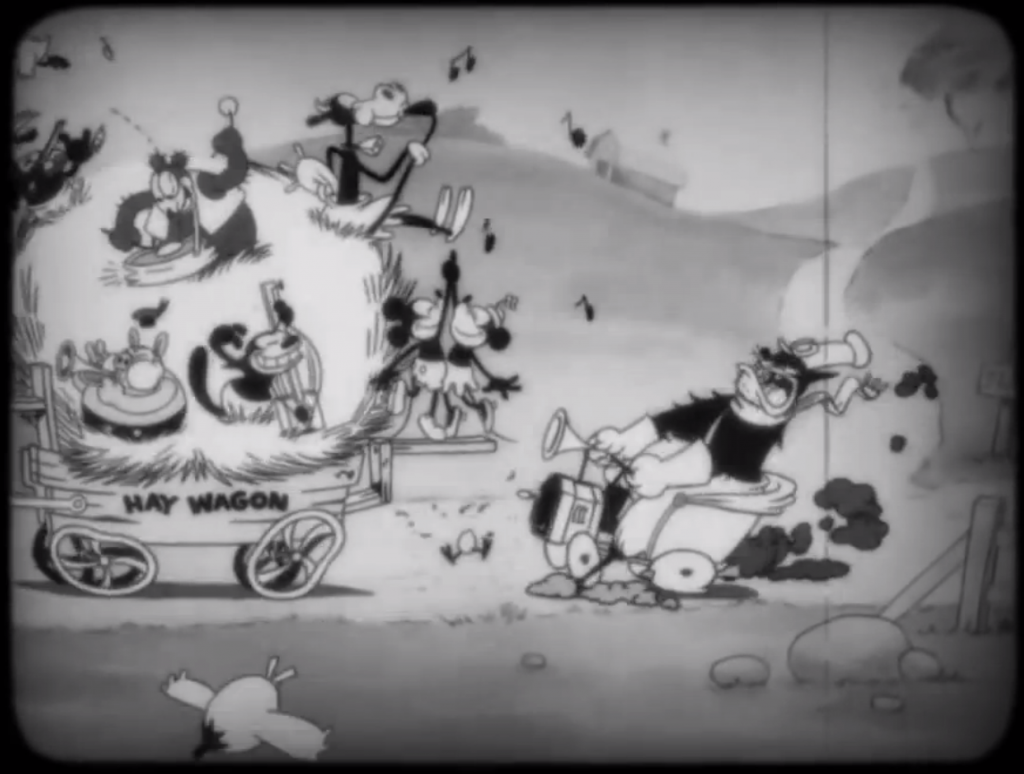 For these first couple of minutes, “Get a Horse!” is mostly successful in recapturing the tone and frivolity of the early Mickey cartoons with some good old-fashioned 2D animation representing the bread-and-butter that helped build the Disney Studios. Then this happens:

After capturing Minnie, Pete forces Mickey and Horace through the theater screen where they emerge in a colorful, modern CG world. Horace, now decked out in a Captain America T-shirt (sigh), helps Mickey fight back with the use of a smartphone.

What follows is a frantic and genuinely creative battle between the characters as they swoop in and out of the CG/2D worlds with Mickey and Minnie collaborating to outwit Pete by using the very theater screen against him. The speed and and intensity of the gags here rival those of old Warner Brothers cartoons resulting in some very clever, hilarious moments.

Yet what begins as an elaborate, loving tribute to the history and origins of Mickey Mouse (and, henceforth, Disney animation) quickly devolves into a fervent roast of the archaic quality of those old cartoons. As Pete first pulls up in his car and honks his anthropomorphic horn, it shouts, “Make way for the future!” This isn’t just a gag – it’s the very thesis of the film.

This is not simply the future of the automobile over the hay wagon but rather the use of CG over traditionally hand drawn animation. Mickey and the gang are only victorious in their CG forms where they have the power to thwart the still 2D Pete. Perhaps it’s a cynical viewpoint, but coinciding within the same year that the Walt Disney Company closed down their hand-drawn animation division in favor of fully CG features, it’s hard not to overlook the short’s underlying message. The Disney Company, like the animated stars of “Get a Horse!,” has shed its 2D past to “make way for the future” of animation.

The manner in which this theme is presented is frustrating. This isn’t an homage to the long history of Disney Animation. Rather, it’s a disrespectful display of how antiquated and cheap these old cartoons are in comparison to the polished, modern style of CG animation. After the screen is torn to shreds towards the end, the characters discover that their dreary 2D environment has now been replaced with a CG panorama as they begin oohing and aahing at how much more colorful everything now is. True, they do eventually revert back to their old black & white existence at the very end but by then the message has rung loud and clear.

Compare this to Disney’s other recent animated short, 2007’s “How to Hook Up Your Home Theater” starring Goofy (his first solo cartoon since 1961). It respectfully modernized the classic “How To” Goofy shorts, displaying enough deference to the past while cleverly updating the character to the present-day. Not only did it succeed but it was absolutely hilarious in its own right.

Despite its flaws, “Get a Horse!” does have its share of imaginative moments. The animated interplay between the CG and 2D characters and environments (especially in the scenes where they’re running in and out of the screen) is absolutely incredible.

The attention to detail in the opening couple of minutes are effective enough to thoroughly sell the notion that this is a long lost Walt Disney production. The animation is loose and generally in tune with the cartoons of the time period (although, honestly, much more fluid and dynamic than its 1920’s aspirations). It’s almost a shame that Disney wasn’t bold enough to follow through and just have the entire short continue in this black & white, traditional animated setting.

Surprisingly, the essentially conservative Disney was bold enough to venture into the more risque and, often times, salacious humor that used to persist in these older cartoons such as Clarabelle Cow revealing her udders in an attempt to hitchhike (and later, disturbingly, using them as bagpipes), Mickey hopping out of his pants, and Minnie Mouse using her panties as a parachute akin to her actions in 1928’s “Plane Crazy” (I distinctly heard a wolf whistle in the theater when this happened and I pray that it was from the soundtrack and not some nut nearby).

Additionally, bringing the Mouse back to his more irreverent roots as a character is remarkably satisfying after decades of being subjugated as a meeker, straight man overshadowed by the more rambunctious Donald Duck and Goofy. Perhaps the old recordings of Walt Disney himself providing the voice for Mickey (which were used for the short) imbued the character with an extra pep that he hasn’t had in quite some time.

For as much as “Get a Horse!” gets right, it is difficult to discount its flippant attitude towards its animated past. However, it is immensely gratifying to see a new Mickey Mouse cartoon back in theaters again. If this release is an indication that the future has more Disney theatrical shorts starring their classic characters in store, then by all means, let’s make way for it.

There are quite a few subtle Disney references throughout the short but the most notable is the blink-and-you’ll-miss-it cameo by Oswald the Lucky Rabbit. He makes an appearance at the very end, popping out momentarily in the bottom right hand corner of the screen as the other characters enjoy their new CG world. This would mark Oswald’s first official appearance in a Disney short in 85 years!

Although Horace Horsecollar’s Captain America T-shirt may be one of Disney’s most shameless moments of cross-promotion, it could have been much worse… 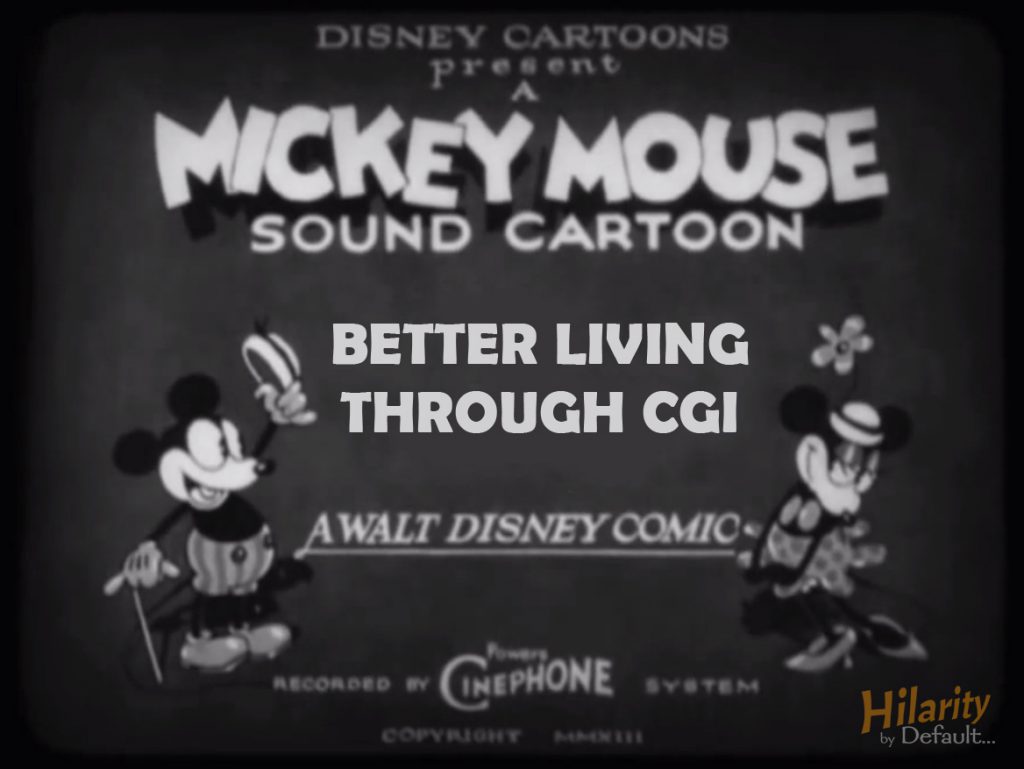 Join us next time when we will explore the animated musical fantasy of Walt Disney’s Pinocchio. For more Default Disney, click here.