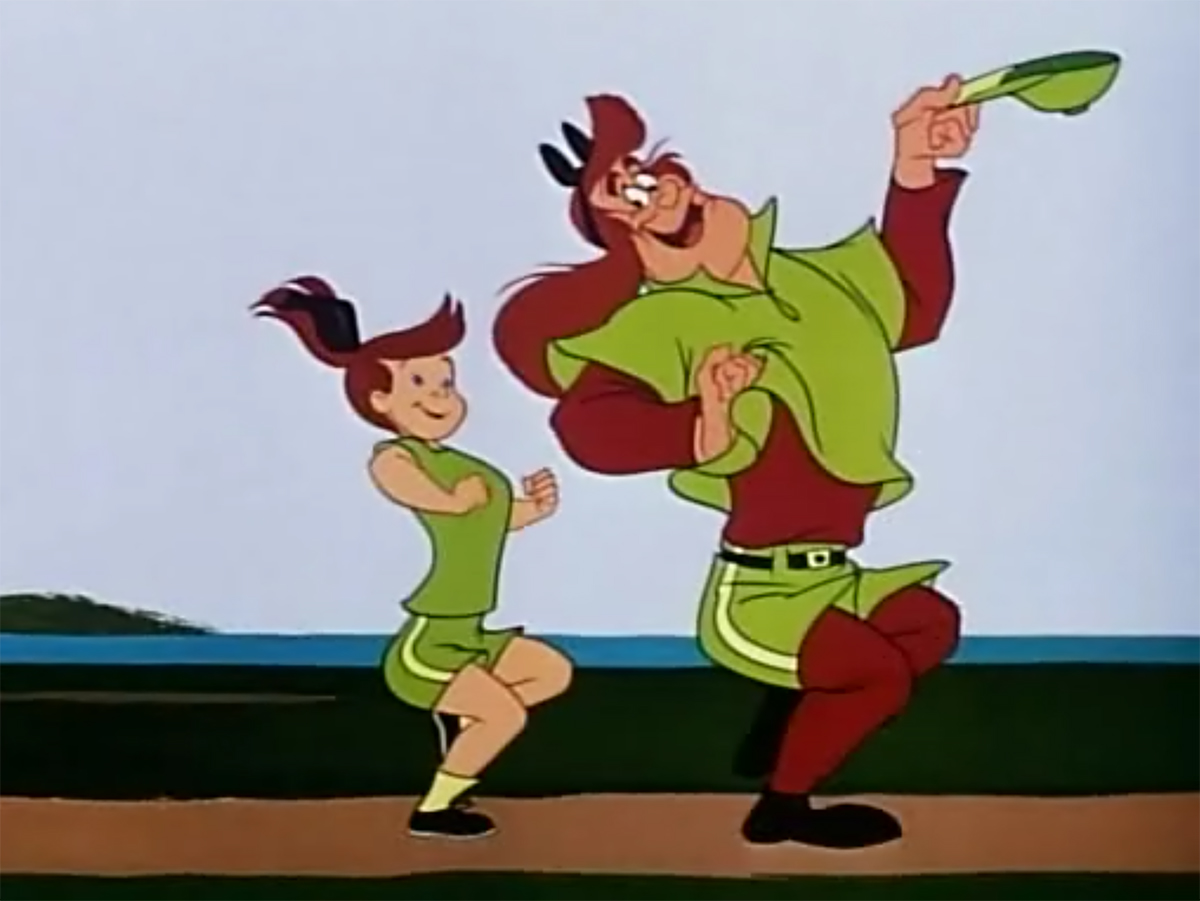 What better way to celebrate the Fourth of July than a tale centered around the old time classic American sport – baseball! Following the popularity of the “Casey at the Bat” segment from Make Mine Music, Walt Disney opted to have an original sequel drafted to the famed Ernest Lawrence Thayer poem – a sequel that would, bizarrely, feature the macho baseball player coaching an all-girl team and dressing in drag. Clearly, a masterpiece in the making… 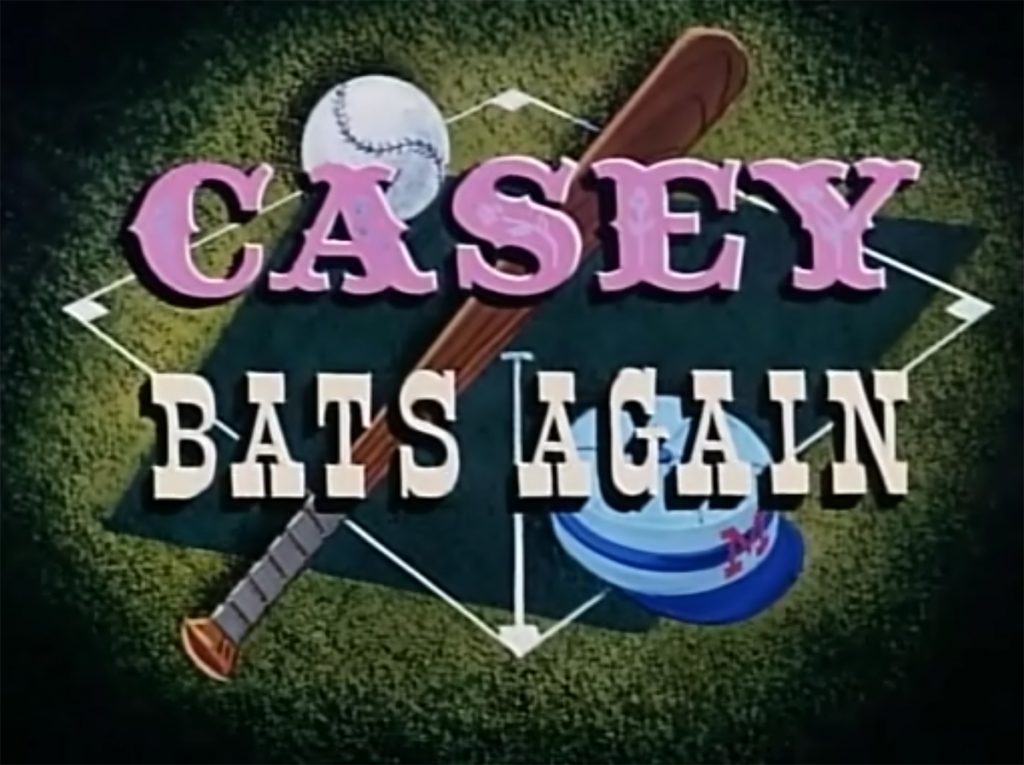 Picking up where the original left off, the short begins with a distraught Casey finding his spirits suddenly perk up when his never-before-mentioned wife announces that she is expecting a baby.

Assuming that it will undoubtedly be a boy, Casey goes crazy handing out cigars and holding baseball-themed baby showers. Once the child is born, Casey’s world is shattered when he’s forced to change the diaper and the science of biology sinks into his thick brain (an atypical moment of anatomical honesty in a Disney cartoon).

Striking out once again, he sulks as a dark rain cloud finds a new home above his house. He receives a momentary glimmer of hope when he discovers that his wife is once again pregnant but is flabbergasted when the doctor delivers a triplet of girls – cuing three rain clouds to appear! After years of apparently ravaging his wife, Casey finally gives up after an entire baseball game’s worth of losing innings.

Dejected, Casey sinks into a deep depression at the thought of raising nine girls and becomes a sad recluse until a realization strikes him – he has enough offspring to start his own all-girl baseball team!

The day of the big game arrives and, after a comic montage of Casey getting accidentally locked out (for some reason), he manages to break in and finds, to his horror, his eldest daughter up to bat for a game-breaking swing. Not taking the chance for a similar loss to his, he dons on drag and steps up to the plate instead.

When viewed back-to-back, keen-eyed viewers may notice a few differences between Make Mine Music‘s “Casey at the Bat” and “Casey Bats Again” – especially in the short’s opening recap.

Electing upon a different style for the short, certain changes were made to make Casey a more sympathetic character in addition to the exaggerated manner of a Goofy cartoon (director Jack Kinney was also the acclaimed helmer of a majority of the Goofy “How To…” series). Heck, the scene of Casey locked out of the game and his incompetent attempts to break in would be easily at home in any Goofy production.

What sets the two shorts apart is the primary focus. “Casey at the Bat,” at its heart, was a celebration of the sport and the disparate personalities involved. While it did indeed feature Casey at the center, it was a morality tale about the fall of an overconfident, egotistical brute. “Casey Bats Again” has fun setting up the constructs for his redemption but takes a more unpredictable route highlighted by some clever sight gags and the gorgeous animation of Fred Moore.

Infamous for his talent illustrating innocent, nubile female figures (often dubbed the “Freddie Moore Girls”), Moore’s distinct style was memorably featured in films such as Fantasia (the centaurettes), Peter Pan (the mermaids), and the aforementioned Make Mine Music (oddly, not “Casey at the Bat” but rather “All the Cats Join In”). The doe-eyed daughters in “Casey Bats Again” would stand as his final showcase due to a tragic car accident. 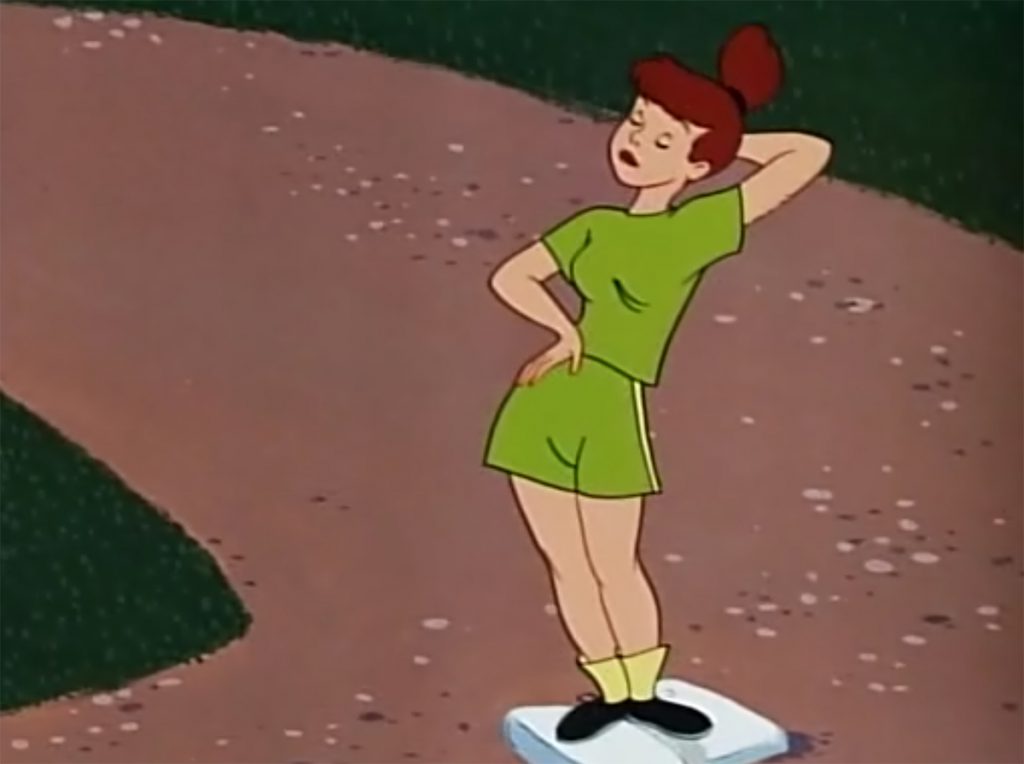 Overall, “Casey Bats Again” is an innocuous but ultimately bland Disney effort. While it falls short of achieving the same memorable pitch of the original, it does have a stronger emphasis on character animation and is far funnier (but not necessarily smarter). Gone is the subtle, descriptive wit of the original poem which is replaced by an inclination for slapstick gags and elementary battle-of-the-sexes allegories. To the short’s credit, many of these work but don’t hit home quite as strongly as intended. 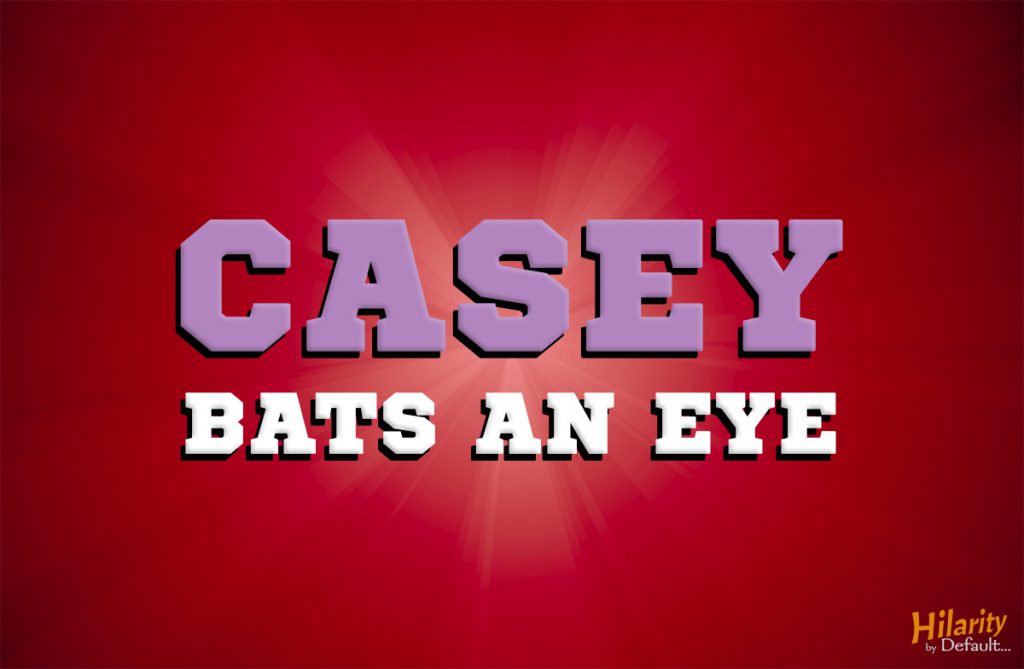 Join us later this week as we dare to dive into one of the most controversial movies of all time – Disney’s Song of the South. For more Default Disney, click here.