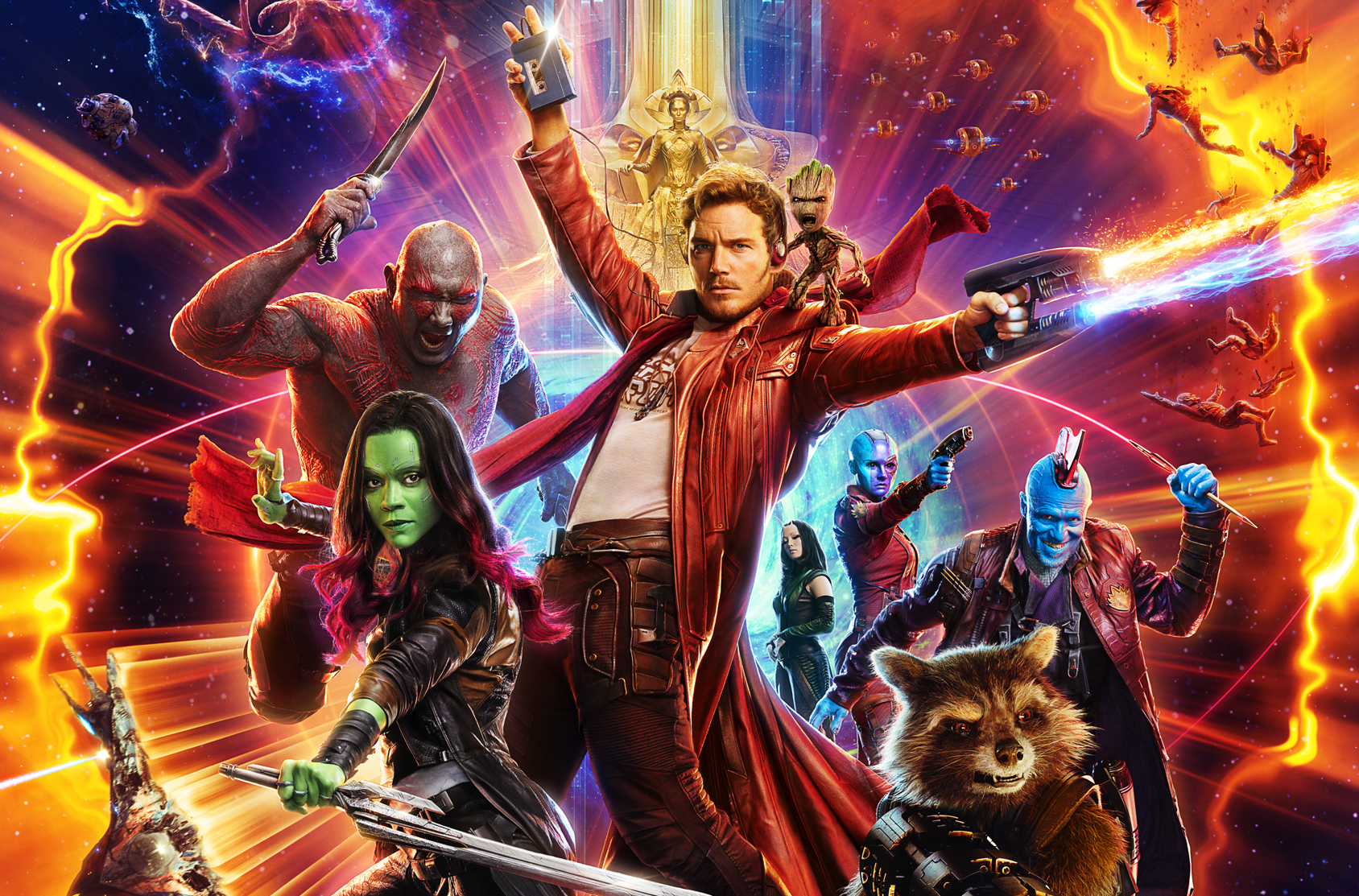 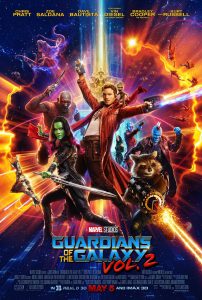 2014’s Guardians of the Galaxy caught everyone by surprise. An adaptation of an abstruse comic book with little household name value that featured a murderous talking space raccoon and a walking, big-eyed tree with specific, concise vocabulary skills, a cast lacking any big A-list stars (outside of the voice talent), and seemingly very little connection to the already established Marvel Cinematic Universe adventures of Iron Man, Captain America, and Thor. Yet, under the passionate guidance of director/writer James Gunn, Guardians ended up becoming something special. Many times compared to Star Wars as the first worthy space opera successor, Guardians of the Galaxy was original, hilarious, engaging, and, like Star Wars, it had heart. With all that going for it, connecting to a raccoon/tree outlaw team up became an effortless pleasure. The gamble having paid off, anticipation for a sequel reached a high with the overarching question being: would Guardians of the Galaxy Vol. 2 recapture the spirited lightning in a bottle success of the original? The answer: yes, to a certain degree.

The 15th entry in the MCU, Vol. 2 kicks off shortly after the events of the first film with Star-Lord (Chris Pratt), Gamora (Zoe Saldana), Drax (Dave Bautista), Rocket (Bradley Cooper), and Baby Groot (Vin Diesel) on the run from a slighted High Priestess (Elizabeth Debicki) and her golden Sovereign army. Their escape leads to multiple family reunions as Gamora reconnects with her dubious sister Nebula (Karen Gillan) and Star-Lord finally reunites with his long lost father, Ego (Kurt Russell) – a literal living planet in human form.

Unlike the Avengers, who were always one fight short of total collapse whenever they teamed up (a thread that paid off in Captain America: Civil War), the Guardians of the Galaxy fully embrace their theme of family. Whereas the Avengers use the term as banner, the Guardians make you believe it. Their inner squabbles ring true of family drama rather than a fixed-script beat. This is what truly distinguishes Guardians of the Galaxy Vol. 2 – rather than an easy beat-for-beat retread of the first film, Gunn separates and explores the characters on a more emotional, vulnerable level. Although the film is bigger and brighter with the stakes arguably larger, the core of the story is a personal one. By exploring their individual struggles, their connections to each other become more tangible.

This approach is a welcome one that unfortunately doesn’t quite land as successfully as intended, precipitating a mild inconsistent tone that bruises the second act. While some of the character pairings are obligatory, such as Star-Lord and his father, others seem perfunctory – particularly Gamora and Nebula. While Nebula’s backstory reveals her to be a tragic figure, their scenes together are more heavy-handed and repetitive than emotional. More inspired is the pairing of Rocket and Yondu (Michael Rooker). Yondu, who served as a secondary antagonist/anti-hero in the first film, gets a chance to truly shine here. Rooker clearly relishes the enhanced role, delivering some of the film’s funniest and, surprisingly, most touching scenes as well as championing Vol. 2‘s standout sequence where he takes out an entire army of goons via his unique, whistling arrow in glorious fashion. This scene alone is worth the price of admission.

One of my biggest apprehensions going in was a potential overuse of Baby Groot – a cute, overly adorable creature that is one part comic relief, one part toy sale gold mine. While the first few minutes suggest a realization of this suspicion, Gunn handles the character in appropriate doses, deftly avoiding the trap of being cloy. Kurt Russell, the perfect casting choice to play Chris Pratt’s omnipotent father, essentially plays himself – for better or worse. Though it’s fun to see him and the inventiveness of his species is clever, he doesn’t leave a particular impact. Incidentally, Russell’s de-aging effect for an opening flashback may be a bit wonky at the onset but serves as the best example of the practice since Michael Douglas in Ant-Man (the mouth movements specifically are a significant step up).

Visually, the film looks outstanding. Ego’s living planet serves as a bizarre, inviting paradise and the space battles light up the screen with multi-colored furor. The signature soundtrack, now a staple of the Guardians films, isn’t as organically woven in but nonetheless serves as a fun backdrop to the action – dancing an all.

Moreover, despite the more staid, emotional journey presented, Vol. 2 is by far the funniest entry in the Marvel series, inducing the largest belly laughs I’ve heard in theatres for quite some time – “traditional” comedies included. Bautista’s Drax once again proves to be a monotone comic wonder and Rocket’s midnight forest showdown has the kinetic execution of a Warner Bros. cartoon brought to hilarious life. Strong enough to mostly offset its tonal issues and flaws, Guardians of the Galaxy Vol. 2 is consistently enjoyable. Though its morals and emotional beats are drawn out with the subtly of an exploding rocket, it’s the natural humor and infallible chemistry of the Guardians that keep this space opera mostly airtight.