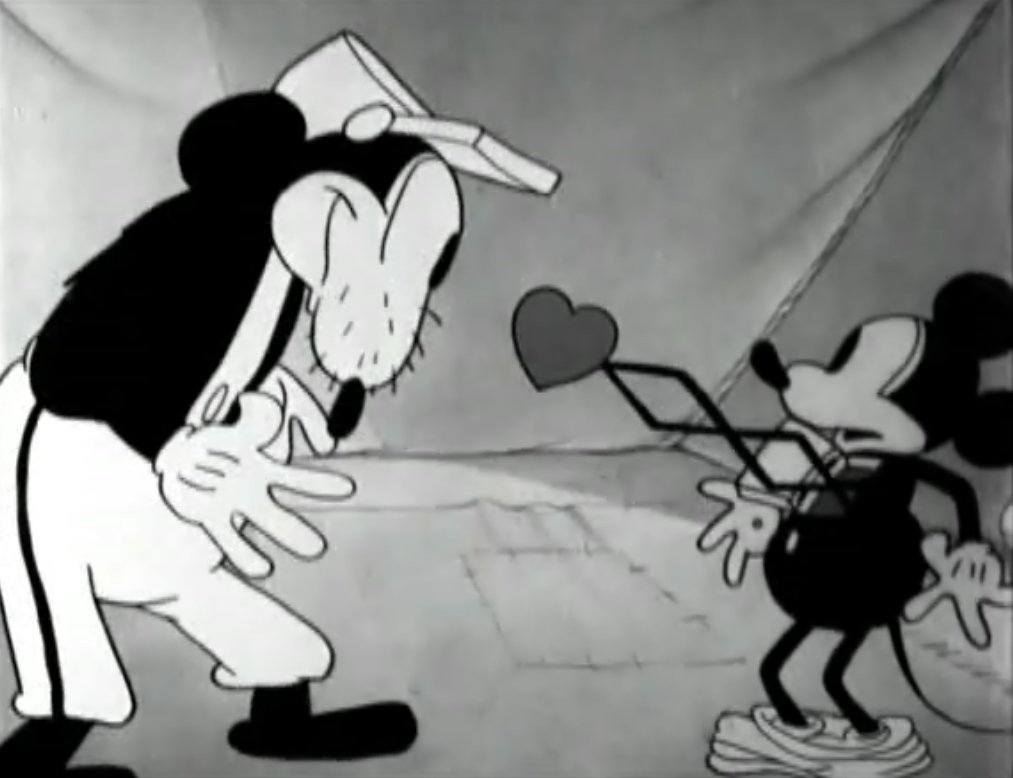 “The Barnyard Battle” is distinctive in that it is the first post-Mickey Disney cartoon with a war theme. As such, one would expect over-the-top cartoony battles and knockout gags (which are featured in spades), but “The Barnyard Battle” seems to have a slightly different focus. If you’ve ever wanted to see Mickey Mouse stripped down naked and given a disturbing, intrusive physical examination (hey, this is the internet so I guess anything is possible), then this is the short for you! If that sounds as unbelievable or over-exaggerated as I bet it does, read on. 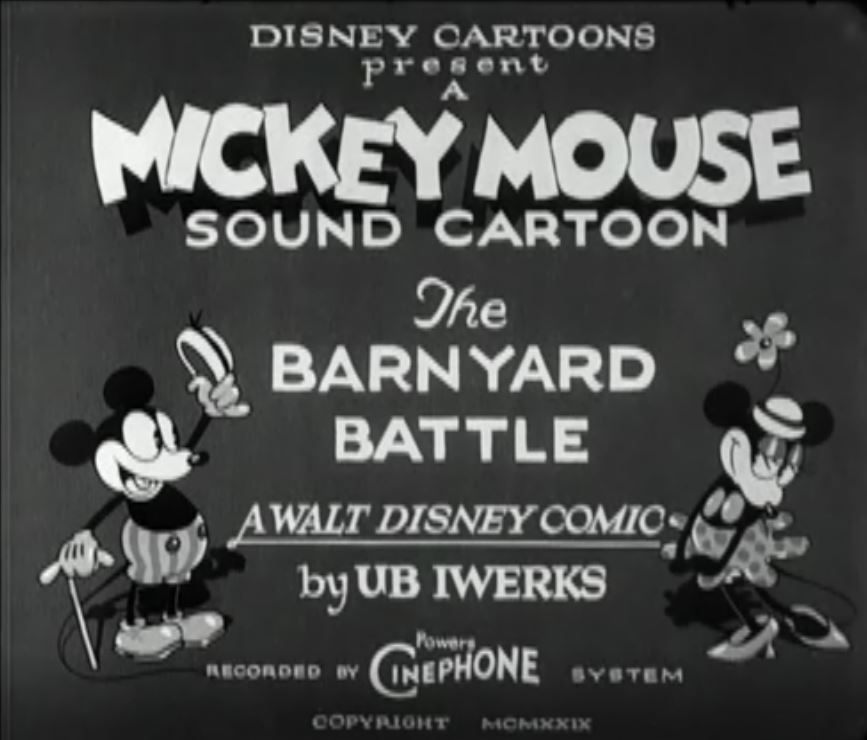 The 7th entry in the Mickey Mouse series, “The Barnyard Battle” opens with an army of mice prepping for – what else? – a barnyard battle with a neighboring cat tribe, led by the vile Pete. As the mice gather around the recruiting office, we are introduced to our spunky hero, Mickey, who very soon finds that being recruited into military service is more dehumanizing (or de-mousanizing?) than he bargained for.

The recruiting officer, sporting a perverse, half-salivating grin on his face, proceeds to slowly pull down Mickey’s shorts before suddenly grabbing his head and painfully stretching him around like mouse-sized rubber band – at one point even pulling the entirety of his innards out of his mouth! Following a series of unpleasant tests, the officer qualifies Mickey for service by inscribing his rear with a giant “OK!”

As cruel as this particular scene is, it remains the single most memorable (for better or worse) part of the short. What follows is a showcase of recycled gags and ideas, as the mice march into battle and confront the cat army in World War I-style trenches (although there are few shades of the U.S. Civil War strewn throughout as well).

As the barnyard battle progresses, we cut to a desperate Mickey operating a machine gun out of a living room window. This scene depicts the cartoon’s subtle, deep psychological layers as it clearly presents the case of a traumatized mouse retreating to a safe environment yet plagued with an urging impulsion to strike back at the world that wronged him; or, it was more likely an excuse for Mickey to use a strip of piano keys as ammunition once running out of bullets.

Mickey then defeats Pete with an over-sized mousetrap (which prompts me to ask why a mouse would own a mousetrap, but I digress), before single-handedly taking down the entire cat army by whacking them each one by one with a sledgehammer as they exit their trench. A triumphant Mickey, standing atop a pile of bodies amidst a cheering crowd, then stabs a panty flagged stick into the rear of one of the cats to signal total victory!

From today’s perspective, “The Barnyard Battle” is a cruel affair whose disturbing qualities go beyond the abnormal physical exam sequence. Mickey here isn’t the better-known lovable joker; rather, he’s a malicious rascal who, when he’s not jeering at oblivious superiors, is almost sadistic in his thrashing of the enemy. To be fair, the early Disney shorts were never compelled to hold back on the over-the-top humiliation of their antagonists, but here it is more noticeable – a feeling that is most likely amplified by the sickly nature of Mickey’s opening examination scene.

However, it is the anomalous nature of the short that makes it stand out as a curiosity. Seeing the wholesome character of Mickey in such a story is admittedly a bizarre surprise. Considering that many in the audience at the time had endured similar procedures and horrors in the Great War, seeing the Mouse ridicule his idiot higher-ups, overcome an insurmountable force in heroic fashion, and share the invasive practices of their own recruitments in cartoon hyperbole would have been a comic release.

Beyond that, the repetitive nature of the short – which includes gags often repeated thrice in quick succession with little deviation – keeps “The Barnyard Battle” feeling padded and often tedious. While there are a few playful touches such as Mickey’s aforementioned musical use of piano keys as bullets as well as some impressive animation that further develop Mickey’s emotions on-screen, this particular battle is overall one well worth skipping for anything other than an oddity.

Are they using women’s undergarments as a battle flag? They’re really taking “panty raid” quite literally. 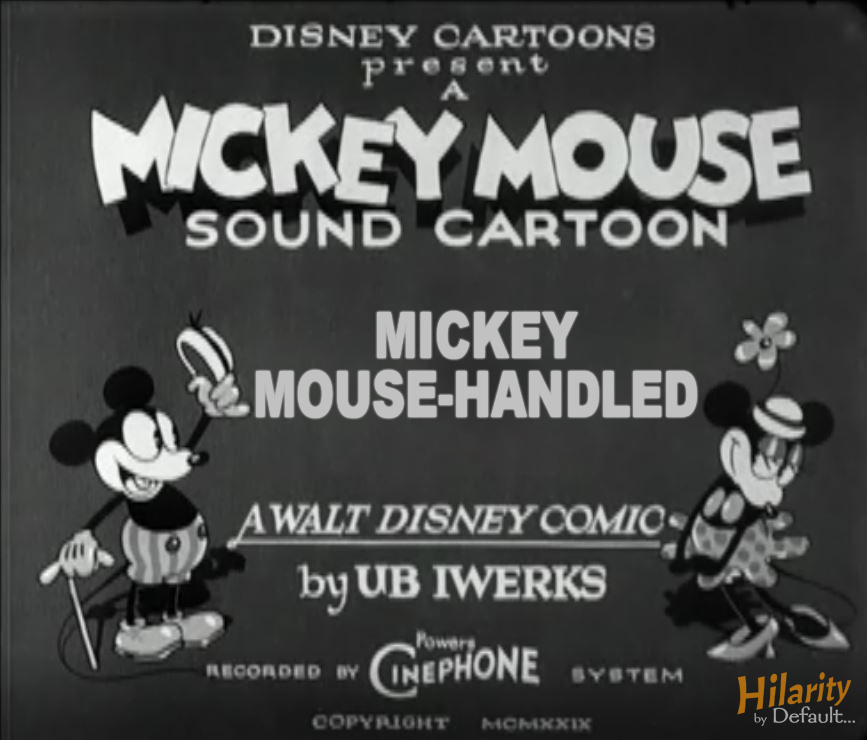 Next time, Donald Duck is once again joined by his Saludos Amigos co-star, José Carioca, plus a new friend, Mexican rooster Panchito Pistoles, as they form the titular Three Caballeros. From flying donkeys to live-action woman horse hybrids, The Three Caballeros is quite possibly the most psychedelic animated feature ever produced by the Mouse House! For more Default Disney, click here.