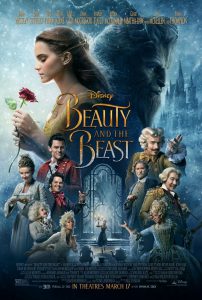 Disney‘s Beauty and the Beast – the tale as old as time as long as it isn’t more than 25 years old; otherwise, it’s prime time for a remake! The Studios’ latest live-action foray into their celebrated animated library is also its most faithful, playing out as a scene-by-scene, song-for-song remake that unfortunately succeeds in nothing more than being a pale imitation of its animated counterpart.

After a cold-hearted prince (Dan Stevens) shamelessly dismisses an old hag in disgust, she reveals herself to be a beautiful enchantress (Hattie Morahan) who places a curse upon him and his subjects for the transgression. Now transformed into a hideous beast, his only hope to regain humanity is earning the true love of a young woman. Having grown more monstrous in his despair, he loses hope until an old inventor (Kevin Kline) accidentally stumbles upon his hidden castle and unwittingly picks a rose to bring home to his daughter, Belle (Emma Watson). The rose, being a constant symbol of the Beast’s curse, enrages him and he locks the poor inventor in a dungeon. Soon, Belle tracks her father down and offers her life to the Beast in exchange. With the help of the castle’s enchanted staff, which include Lumiere (Ewan McGregor), a lively candelabra, Cogsworth (Ian McKellen), a cowardly clock, and Mrs. Potts (Emma Thompson), a sweet, motherly teapot, she and the Beast begin to discover that they have more in common than outward appearances would imply. Meanwhile, the villainous Gaston (Luke Evans), the living embodiment of Narcissus, plots to steal Belle for himself – whatever the cost.

Clocking in at 40 minutes longer than the original animated film, 2017’s Beauty and the Beast fills in the extra run-time with additional songs and backstory. Many times more superfluous to an already simple story, the film loses the compact pace of the original whilst adding little of value in return. The new songs, with the possible exception of the Beast’s “Evermore,” don’t hold a candle to the original works, prompting one to wonder why the songs from the smash-hit Broadway adaptation weren’t incorporated. As decent as “Evermore” is, “If I Can’t Love Her” from the play is far more powerful.

More favorable are the fixes to some of the animated film’s plot holes (a direction that most potential remakes should take note of). No longer is it implied that the Beast was cursed as an 11 year-old boy and the nearby village’s knowledge of the castle’s existence is wiped away as part of the curse.

Perhaps the biggest issue with the film is the very thing that guarantees its box office success: nostalgia. It’s hard not to compare it to the animated version when you’re constantly being hit over the head with callbacks, dialogue, jokes, and other memorable scenes from the previous film. It is a constant reminder of how much better it was all done before.

With this approach, when there is an alteration or addition, it becomes infinitely more glaring, especially when it is inferior. Case in point: during the “Belle” introductory number, there is a bridge in the song where she points out her particular favorite moment from the book she’s reading. In the original, she’s reading by a fountain and exclaiming her thoughts to some sheep who take interest in the book (mostly as a dietary source of fiber, but I digress). In the 2017 version, she’s aimlessly strutting through town, book closed and at her side, singing to herself in a crowd. This isn’t depictive of a “funny girl” as the lyrics suggest – it’s a chilling call for mental help! Too harsh? Imagine if I suddenly walked into a mall, with one of my favorite Bram Stoker novels in my pocket, singing about my favorite scene:

Ohhhhh! Isn’t this amazing?
It’s my favorite part because of blood!
Here’s where we meet Count Dracula
But he won’t devour her with his fangs
Till chapter three!

Now let’s be clear, all musicals take some creative license with the outburst of songs in public but, in this case, it was staged much more effectively in the original film. True, she was singing to sheep but at least she was directing her thoughts to something with a beating heart! It made Belle a warmer, more open, and passionate young woman who wanted to share her excitement with anyone who would listen. Since the town ignored her, she was independent enough to share it with sheep if she had to! All that with one verse of song. 2017’s film tries to accomplish this by having her later persecuted for having the gall to teach a girl to read – extra padding for a far too blatant message.

The bright, shining spot of 2017’s Beast is Luke Evans as Gaston. Deliciously full of himself with bravado dripping out of every half-wit word he utters and gesture he accords, his Gaston is the single triumph of casting in the film and a joy to watch. Unfortunately, it detracts from Emma Watson and Dan Stevens’ somewhat stale performances. Stevens does a fine job as the Beast (bar a strange and unnecessary prologue that looks like a Phantom of the Opera fever dream) but we don’t spend as much time really getting to know him. By the time he sings “Evermore,” we’re already into the third act. In fact, I wouldn’t be surprised if Kevin Kline has as much (or even more) screentime in the film. Moreover, the added plethora of backstory to Belle does more to build up Kline as a sympathetic underdog than to bridge the romantic gap between her and the Beast!

Although Watson certainly looks the part, her performance here is rather flat – a fallacy which may be more the fault of Bill Condon‘s direction than her own. He is certainly a visual director, setting the stage for some grand production numbers, but the film offers very little build up to its set pieces and lacks the spooky atmosphere and anxiety that permeated throughout the first act of the animated version. When Watson watches the “Be Our Guest” number (the highlight of the film), she only looks mildly amused as if they were saving her one ecstatic reaction to the Beast’s unveiling of the castle’s library. Where Belle gasped along with the audience at the animated display in the original “Guest,” here we get a tepid smile and a giggle. If she’s not floored by it, why should we? It’s a testament to the Disney Renaissance animators that their work with Belle gave her more heart and expression than a flesh-and-blood human could accomplish here.

All in all, 2017’s Beauty and the Beast is hardly a bad film, flaws and all. It just fails to live up to the magic of its direct inspiration – an inspiration that it doesn’t allow you to overlook! Those unfamiliar with the original will likely have a blast – the art-direction is incredible, the Ashman/Menken songs are as catchy as ever, and the whimsical nature that made the first film a wonder yields its fingerprints all over. Yet, at the end of the day as I was leaving the theatre, all I wanted to do was watch the animated masterpiece. In the years to come, it is unlikely that this version will stand as tall as that original tale as old as time.