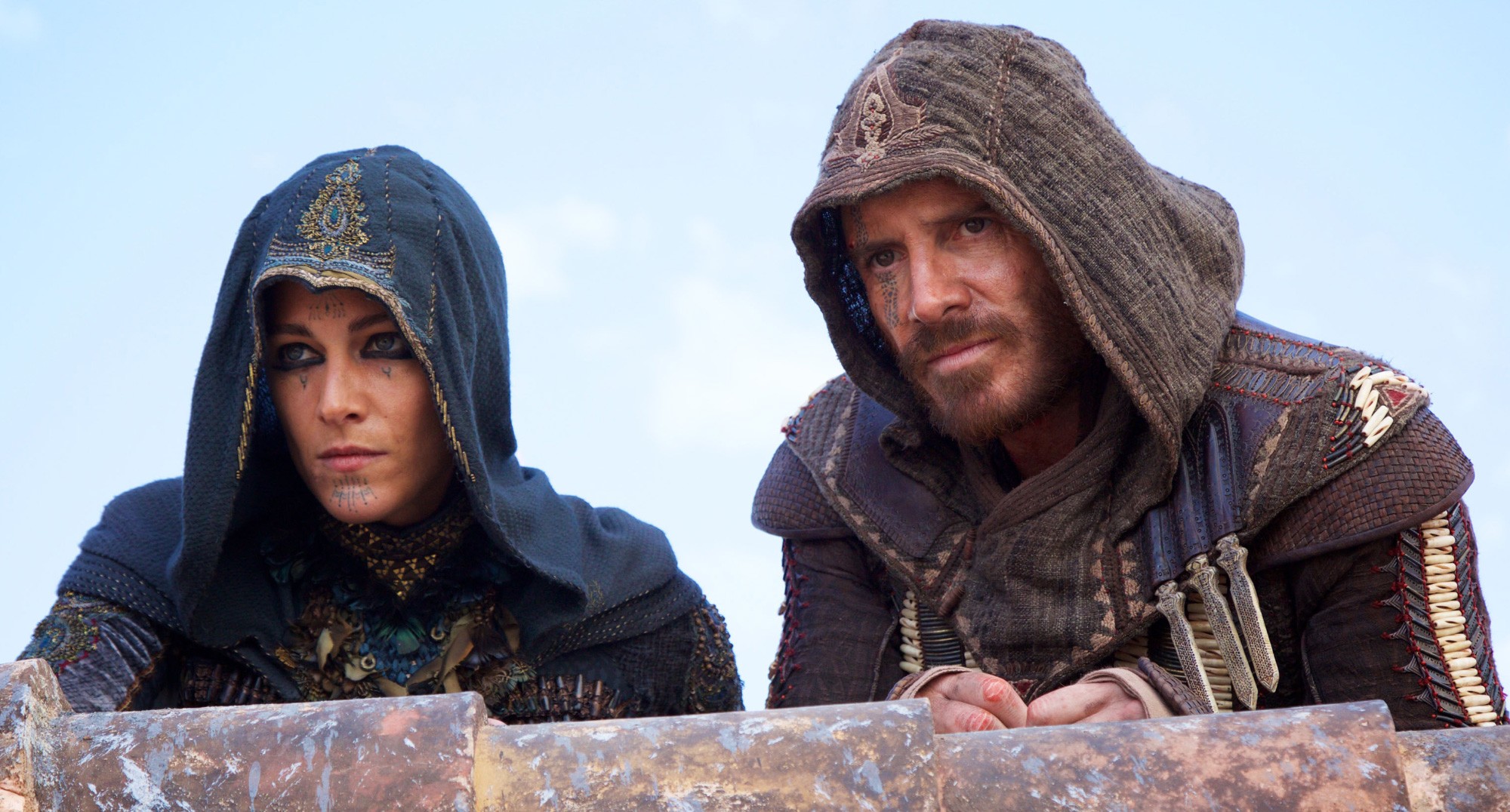 Watching Assassin’s Creed earlier this week (because no word spreads holiday cheer faster than “assassin”), I often found my mind wandering, especially when caught in many of the film’s massive plot holes. A slew of questions kept popping in. What could possibly salvage a film that somehow attracted so much talent? What the heck is a gifted artist like Michael Fassbender doing wasting his time here, as an actor and producer? I wonder how many people thought that this was somehow a sequel to the successful Rocky continuation Creed?

Assassin’s Creed kicks off with a group of consecutive scenes that are just fascinating for their berserk vaulting from one unintelligible sequence to another. In the span of minutes, we go from an ancient finger cutting ceremony from the 1400’s which is interrupted by a rock music flying eagle montage (the first of many!) which leads up to a 1980’s-era boy falling off a tall roof due to an unsuccessful bike jump (leaving both him and the bike completely unscathed, of course). We finally see the boy getting home to discover that his father has joined a team of hooded assassins and has slit his mother’s throat at the kitchen table (gotta love any escapist action movie that begins with a good dose of uxoricide). 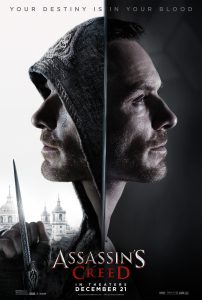 With that nightmare of a backstory over with, we finally meet our main character, Callum Lynch (Fassbender), a death-row convict in the process of receiving a lethal injection. After a death montage that feels like a cross between the ending of 2001: A Space Odyssey, a Marilyn Manson music video, and a PBS eagle documentary, Callum wakes up to discover that his execution had actually been staged (so much for that death montage) by the sinister corporation, Abstergo, headed by Alan Rikkin (Jeremy Irons).

A high-ranking member of the Knights Templar, Alan is on a desperate search to discover the whereabouts of the Apple of Eden, an artifact with the power to rule the world by eliminating free will (with as many times as they reference the Apple’s immense power, I can honestly say that I was surprised that there weren’t more iPhones in the film). Having ascertained that Callum’s ancestor was part of an ancient creed protecting the Apple during the Spanish Inquisition (guess they checked ancestry.com), Alan forces him to participate in the Animus Project, headed by Alan’s tenacious daughter (Marion Cotillard). The Animus, which involves Callum getting strapped to the end of what looks like a giant Erector Set, is capable of allowing one to relive the thoughts and actions of their ancestors. Callum soon finds himself performing 1400’s parkour and fighting off bands of Templars but the closer he gets to the Apple, the more he begins to understand his true purpose.

Being not much of a gamer myself (at least, beyond classic Nintendo and Sega Genesis), I can’t compare the film to the successful video game series that it is based on (I leave the video game talk to Sai and Stormy‘s reTROviews series). As a film, Assassin’s Creed is a complete mess, seemingly patched together by a moron on a virtual reality sugar rush. The biggest waste is the abundance of significant talent on screen who are practically all left in a debris of paycheck grabs. Irons, Cotillard, and Brendan Gleeson are there in name only, servicing one expository speech after another and not much more. Fassbender, to his credit, actually gives it a faithful attempt with impressive physicality and dynamism but even he cannot elevate a script that asphyxiates the whole production.

On the plus side, the premise (which serves as the crux of the video game series) about a device that allows one to essentially experience the lives of their ancestors is a fascinating concept and could have been the basis for an excellent sci-fi venture. Instead, every use of this concept is an excuse for another time displaced video game level with the real world serving as overlong, boring cut scenes.

Speaking of video game levels, Creed‘s action scenes are disjointed to the point that they end up being monotonous. With extreme close ups, bumpy editing, and screen movements accompanied by annoying sound effects, what should have been dazzling sequences (such as a rooftop parkour chase) wind up being confused messes punctuated by clutter and chaos. Hell, the editing is so bombastic and choppy that at one point it looks like Fassbender shoots one of his own compatriots with an arrow. Forget any hope of enjoying what looks like decent fight choreography. In Assassin’s Creed, it feels like the camera itself is getting attacked by its own worst enemy – incompetence. 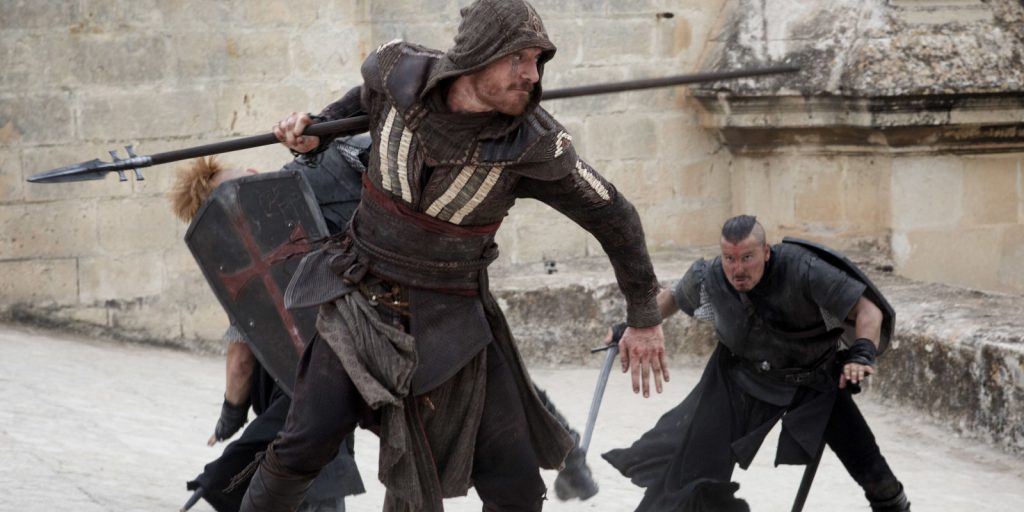 Some of its flaws could have been overlooked if it led to a stronger ending. Instead, it’s the weakest part of an already emaciated film. It’s final sequence is basically 98% build up, 2% pay off. The best way I can describe the ending is that it’s like taking an overdose of Viagra only to discover that your date has cancelled. It’s as disastrous as it sounds.

All in all, Assassin’s Creed has an interesting premise that is never allowed to breathe. Instead, the film drowns in its own ineptitude trying so hard to be a product that it forgets to be a movie. A more appropriate title would have been Asinine Creed for how moronic it is in its presentation.