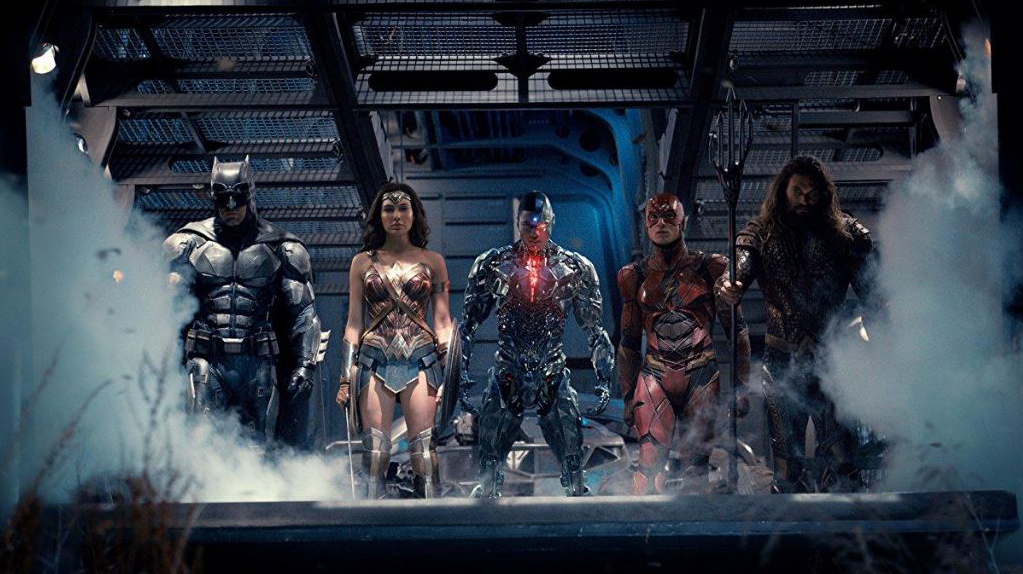 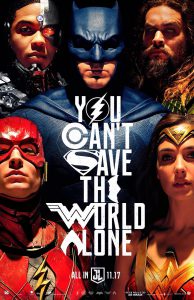 [Mild Spoilers that do not go beyond the film’s promotional material.] Zack Snyder‘s Justice League, the fifth installment of the rocky DC Extended Universe (DCEU), succeeds purely on the benefit of low expectations. Having lured Avengers writer/director Joss Whedon and his more lighthearted approach from Marvel (he is reported to have helmed nearly 20% of this film in reshoots), Justice League is enhanced by a trait missing from a majority of its predecessors – some genuine fun! Too bad much of it is buried under a convoluted, disjointed screenplay and a scabrous tone that reflects the stylistic clash of its two directors.

Following the death of Superman (Henry Cavill), Batman (Ben Affleck) discovers the early traces of an alien invasion as masked, insect-like scouts start attacking Gotham City. Quickly realizing that he will soon be outmatched, he sets out to form a team of exceptional individuals to give the earth a fighting chance. They include: Wonder Woman (Gal Gadot), an Amazonian goddess; the Flash (Ezra Miller), a wisecracking youth with superhuman speed; Aquaman (Jason Momoa), a rough Atlantean merman who can speak with fish; and Cyborg (Ray Fisher), a tech genius with evolving, cybernetic parts. But will their combined power be enough to defeat the alien army headed by the villainous Steppenwolf (Ciarán Hinds)?

It’s easy to fall prey to the nagging DC vs. Marvel “division” prominent online among comic book aficionados and fanatics, yet this is a film that blatantly invites comparison – especially with the shared tie of Joss Whedon. Still further, when one compares Whedon’s original Avengers to Justice League, similarities come to light that are more questionable than innocuous, routine comic lore. Without delving too far into major spoilers, both films feature:

This highlights one of Justice League‘s main issues – while it’s an improvement in many ways from its DECU predecessors (with the notable exception of Wonder Woman), at its core is a sense of dull familiarity. It doesn’t help that the entirety of the first half of the film is bogged down by jumbled, rapid fire set-up and backstories for its cast as it vainly attempts to fashion introductions for half of its characters (an issue that Marvel sidestepped with proper solo films released before its team up film).

Half the fun of Batman meeting Flash or Wonder Woman tracking down Cyborg is lost when much of that screentime in dedicated to exposition. Aquaman works better thanks in part to his quieter, “I don’t give a shit” attitude (he’s so badass that he literally pollutes the ocean with whiskey bottles). And let’s not forget the five minute scene of Lois Lane (Amy Adams) and Martha Kent (Diane Lane) sitting in a stale office conference room discussing bank foreclosures, writer’s block, and sexism! Thrilling.

The villain, Steppenwolf, is the least developed of all. For all the flack that Marvel (justly) gets for its general weak assortment of antagonists, many would appear to achieve Shakespearean levels of depth when set side-by-side with this cackling monstrosity. The terrible visual effects work only assists in making him appear to be the lower level video game boss that he is.

On the plus side is the [aforementioned “surprise” spoiler revealed in its promotion] return of Henry Cavill as Superman halfway through. Though the method of his resurrection is ludicrous at best, his portrayal here is far more in tune with the revered, all-American hero of old. Contrary to the dour mood of Man of Steel and Batman v Superman, his character here finally flourishes as an enjoyable symbol for hope as he strives to impart “justice” and save civilians (leading to one of the better gags in the film). Moreover, he finally gets a chance to smile! When the bars of John Williams‘ famous theme are played, it’s hard not to smile along with him. The same goes for Danny Elfman‘s (who also scored this picture) original ’89 Batman theme. These cues score the right nostalgia points despite referencing far better films.

Overall, a stronger second half and a healthy dose of humor help direct Justice League and the franchise as a whole towards a better direction. Though its color pallet still stings of Vaseline and oil, there are enough splashes of color peaking through to remind its audience that there’s at least some life prodding to break through.

Note: the film contains a mid-credit and after credit scene. 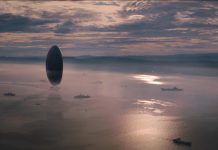