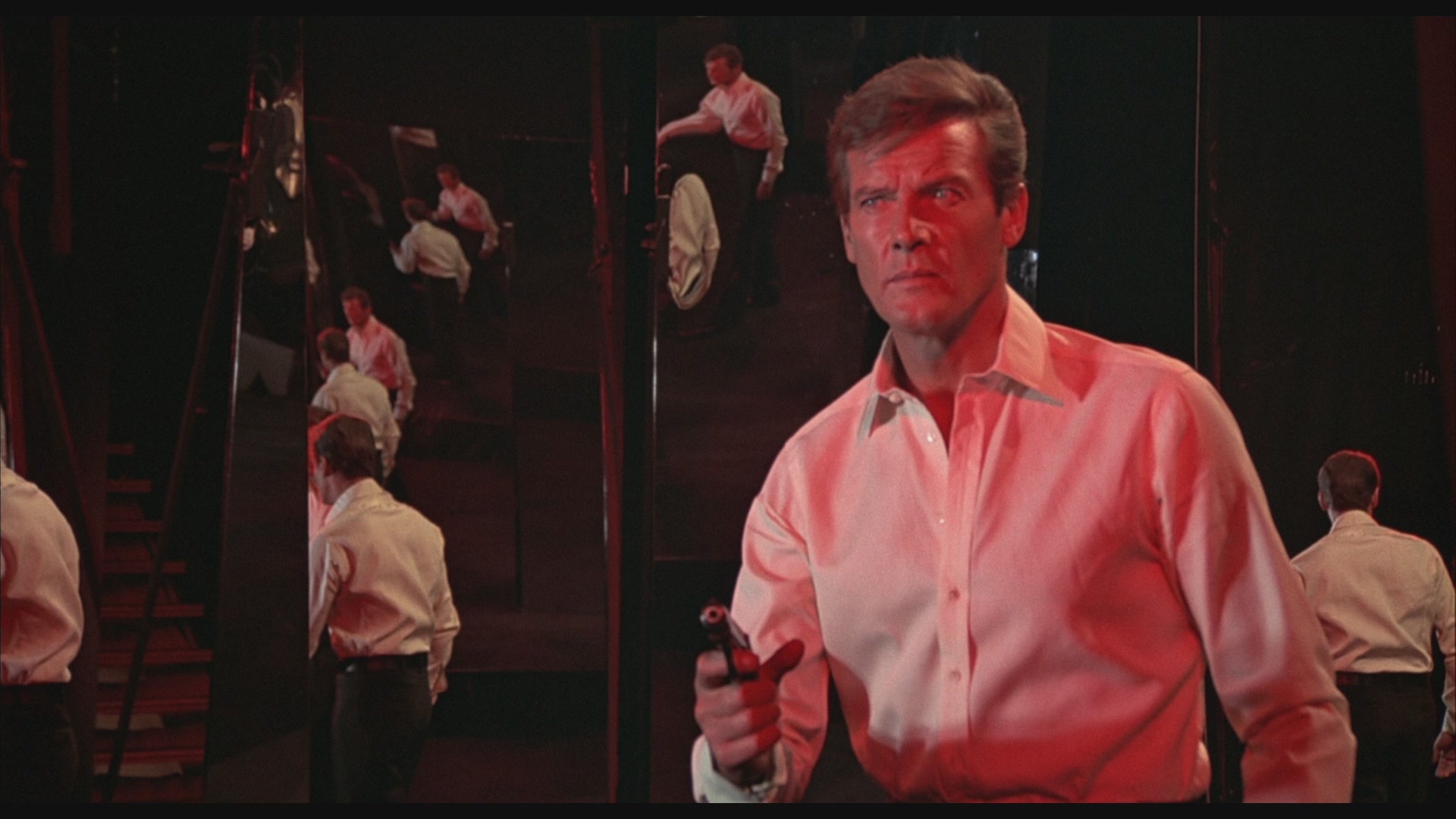 When people mention the few box-office failures in the Bond franchise, generally fingers are pointed towards George Lazenby’s one-off On Her Majesty’s Secret Service or Timothy Dalton’s unexpected swansong, Licence to Kill. The Man with the Golden Gun is the misstep that is many-a-time overlooked or forgotten about altogether (probably due to Roger Moore’s overall success as the character). Golden Gun is not only one of the biggest box-office duds in the series, but it also happens to be one of the worst – a sickly, distasteful film with very few redeeming qualities. 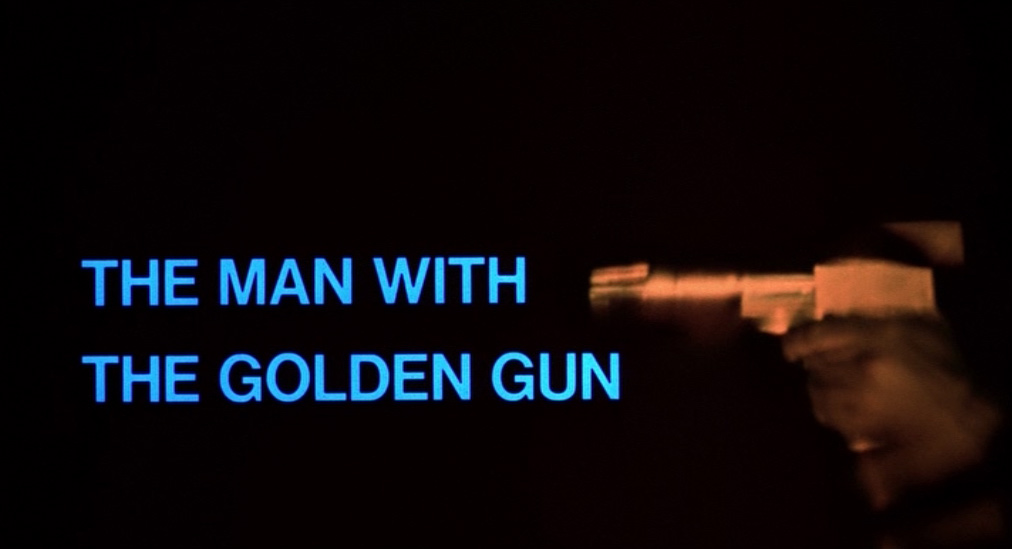 When a golden bullet arrives at MI6 with 007’s number inscribed on it, James Bond (Moore) is pulled away from an energy crisis mission due to the implied threat of world-class assassin Scaramanga (Christopher Lee), also known as the Man with the Golden Gun. With the bullet marking an implicit death sentence in the world of espionage, Bond takes it upon himself to track down and kill the assassin instead resulting in an epic duel of marksmanship.

At first glance, The Man with the Golden Gun‘s setup is intriguing – an apparent break in formula as 007’s mission is inherently an off-the-books assassination attempt with personal stakes on the line. If this plot narrative had persevered as the sole focus of the film, Golden Gun would have had the potential to be one of the most distinct, gripping entries in the series. Unfortunately, the film quickly gets bogged down by discordant, competing storylines, cringeworthy humor, and overlong, uninspired action scenes.

With The Man with the Golden Gun, you get two Bond films for the price of one. The first, the aforementioned assassin vs. assassin narrative and the second, a sci-fi venture involving the search for a “plot device” capable of solving the world energy crisis. These two threads are haphazardly crammed together with the smoothness of razor blade-laced sandpaper.

To call Golden Gun tonally inconsistent is an understatement. One scene may feature Bond disturbingly beating down and blackmailing a semi-nude woman for information which is then shortly followed by a scene with Bond disturbingly squeezing the large buttocks of a sumo wrestler before getting knocked out by a masked, spear-handling dwarf in a speedo.

Indeed, The Man with the Golden Gun visualizes a wide range of possible definitions for the word “disturbing” in one convenient package. Strangest of all, the film’s violence is mostly dialed back to the point that this is the only 007 film where the spy with the license to kill only does so on one occasion (take a guess who). Between the unwelcome reappearance of J.W. Pepper (Clifton James)—the redneck Louisiana sheriff somehow turning up in rural Hong Kong(!)—and overdone “comedic” hi-jinks such as a karate army getting taken down by two Chinese school girls in hand-to-hand combat, the film seems intended for family audiences (heck, one of the taglines clearly stated it was “A Christmas Present from James Bond”).

On the other hand, it is also one of the most sexually explicit entries in the series. From Choo Me’s skinny-dip…

…to the countless golden gun/penis allegories…

Heck, even Bond and Q have an odd exchange about nipple kink! Although I’d argue that there’s nothing particularly wrong with the more explicit nature of these scenes, it does seem quite odd when mixed with the tamer, almost juvenile aspects of the film – like a Spy Kids movie suddenly featuring a burlesque sequence.

Roger Moore turns in an atypically dark performance as Bond. Besides his aforementioned brutality, he also threatens to shoot an armorer’s groin off for information, throws a little boy off a moving boat, and locks his assistant, Mary Goodnight (Britt Ekland), in a closet for hours while he passionately makes love to her romantic rival a few feet away! While it is intriguing to see a more ruthless side to Moore’s 007, these scenes register as unnatural – a false bruise atop of Roger’s notorious eyebrow raises. Thankfully, the actor would be later be served better in For Your Eyes Only – another more serious foray for Moore that benefited from a far more grounded and human screenplay.

The less said about Britt Ekland’s Goodnight, the better. Beyond looking delicious in a nightie, she achieves a rank in the upper pantheon of the most useless Bond girls. Her biggest accomplishments? She gets kidnapped by a villainous dwarf (Hervé Villechaize) at a circus and later almost burns 007’s face off when she misplaces her butt!

The sole joy in The Man with the Golden Gun is Christopher Lee as Scaramanga. His dinner confrontation with Moore alone stands as the highlight of the film. Set up as the anti-Bond, Golden Gun poses an intriguing question: would Scaramanga be the result of a James Bond turned bad? A question posed but never fully explored outside of this scene; instead, the film veers off into lackluster spectacle. Outside of one decent fight early on between Bond and three goons in a dressing room (who these goons are or why they attacked is of no consequence – the film needs an action beat!) and Bond’s old-school climactic dual with titular villain, the action is overall lacking.

Moreover, the film’s biggest stunt set-piece—a daring spiral bridge leap—also happens to be the most indicative of Golden Gun’s overarching problem – that of high potential squandered by poor execution and compromising “comedy.” It stands as one of the greatest stunts of the decade whose impact is thoroughly obfuscated by the most ill-timed use of a joke slide whistle in the history of cinema! 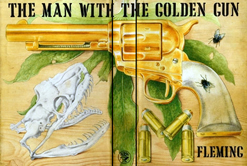 Ian Fleming’s The Man with the Golden Gun was his final 007 novel published posthumously. Lacking the flare that further drafts would have afforded, the novel feels anemic when compared to his early Bond efforts. Its most distinctive quality involves a twist opening that follows through on You Only Live Twice‘s cliffhanger with a brainwashed Bond returning home to assassinate M (a scenario hinted at decades later in Die Another Day)! Having failed at the attempt due to M’s quick-thinking, Bond is rehabilitated and put on an impossible mission – one that will either have him die with honor or reaffirm his station as Her Majesty’s best.

His assignment: assassinate Francisco “Pistols” Scaramanga, the Man with the Golden Gun, a professional killer believed to have murdered several British agents. Teaming up with Felix Leiter (who is MIA in the film), he infiltrates Scaramanga’s operation in Jamaica but is soon discovered leading to a swamp gun battle.

The film has little resemblance to the book outside of its core characters. Like Live and Let Die, many aspects from the story wound up being adapted more faithfully in Licence to Kill, a film that, ironically, would share Golden Gun‘s dubious fate as a box-office disappointment.

With the exception of the 007-less teaser of its immediate predecessor, Live and Let Die, The Man with the Golden Gun‘s pre-credit sequence may be the most forgettable in the series.

Focusing primarily on the villain, the teaser pits Scaramanga against a would-be assassin (a surviving gangster from Diamonds Are Forever, no less) as they square off in a deadly, polychromatic fun house complete with wax figurines of cowboys…

…Al Capone, and James Bond himself. Given the film’s title, there’s little to no suspense as to how the scene will play out. Worse still, it undermines the ultimate mystery of the villain, especially since it is revealed early on that none of the world’s authorities have a remote clue as to his identity or appearance (with the bizarre exception of his parental history, medical records, and, odder still, the phone number to his private Chinese junker!). This premature audience reveal clumsily defeats the intrigue throughout the first half of the film! 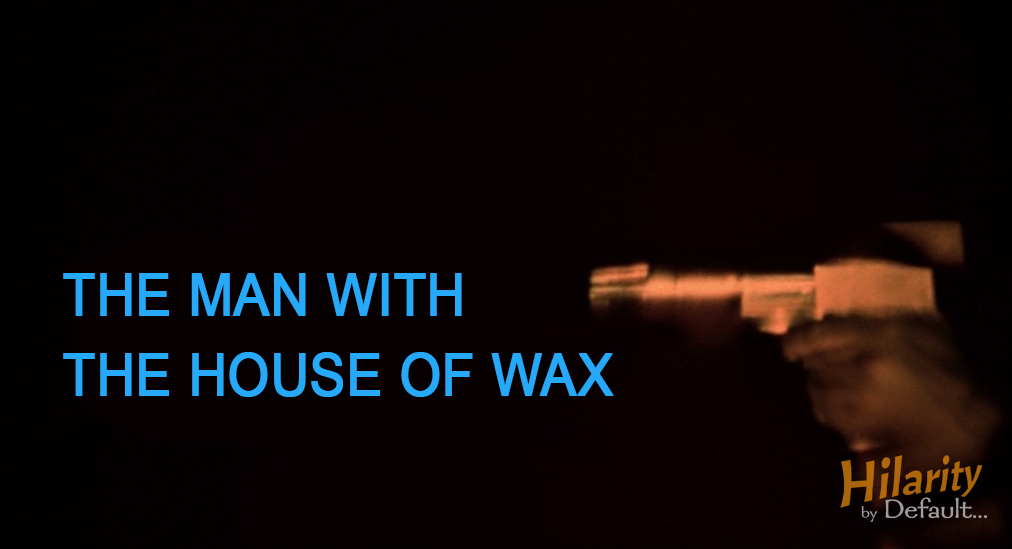 Sadly, the credit sequence allows no reprieve. “The Man with the Golden Gun,” sung by Lulu, is among the worst compositions ever written for the franchise with lyrics that are obnoxiously juvenile rather than clever and a brassy melody akin to an elephant in need of diuretics.

On the plus side, the visuals score one improvement over Live and Let Die – they replaced the dated fiber optic display with sparkles – a true step in the right direction.

The only thing that keeps The Man with the Golden Gun from being a complete disaster is the presence of Christopher Lee and his interactions with Moore. It is this one and only aspect that give Golden Gun a slight edge over Diamonds Are Forever but that’s not saying much. Overall, Golden Gun is a ponderous, insipid mess whose best redeeming feature is its coda announcement that James Bond would return in the fantastic The Spy Who Loved Me.

Although Bond is light on gadgets this time around, Scaramanga himself is decked out with an accessory assembled golden gun, a sun-powered laser (the perfect melding of sustainable green technology and imminent death), and a car that turns into a (model) plane! 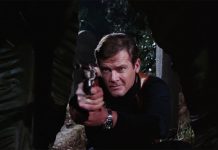 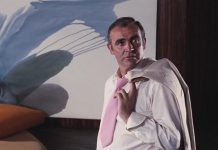 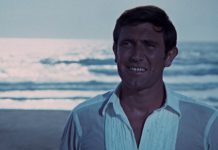 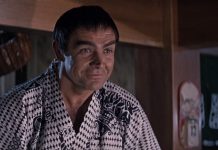 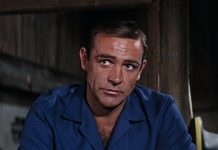 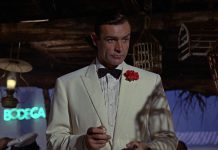