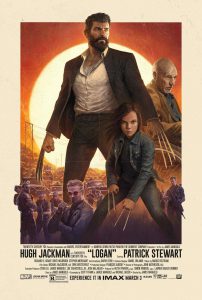 Logan, the 10th film in the continuity-challenged X-Men franchise and the final entry in the Wolverine trilogy, sees the return of Hugh Jackman and Patrick Stewart in a poignant swan song to nearly two decades onscreen as Logan/Wolverine and Professor X. Those expecting the wise-cracking, cigar chomping Wolverine from the previous films in the series are in for a surprise. Logan is a bleak, brutally violent film with little humor to offset its dreary mood as it explores some fascinating questions: what happens when superheroes get old and broken down? Where do they go when they find that they are no longer in full control of their powers? The answer is not the Shady Rest Retirement Home (although Bruce Campbell’s Elvis could certainly use the company).

It is the year 2029 and mutants are now a dying race. Logan, succumbing to years of physical agony, is a dilapidated former shell of his old self reduced to shuttling a limo in Texas and doing back alley drug deals to aid an ailing Professor Xavier. Now a recluse in Mexico and suffering from onset dementia (a global threat for the world’s baldest and most powerful mental weapon of mass destruction), Xavier tries to convince Logan to help a lonely young mutant (Dafne Keen in an impressive debut) who may have more in common with him than at first glance. They soon find themselves on the run to the Canadian border (quite timely, eh?) from a government-funded commando team, known as the Reavers, hellbent on tracking her down.

Sticklers of film series continuity would immediately find flaws in Logan. After all, following the heels of X-Men: Days of Future Past which was set in 2023, the X-Men’s entire existence, not to mention the world’s whole population of mutants, has gone to hell in a mere six years. To Logan‘s credit, such issues, along with the franchise’s crazy splintered timelines, have little effect to the overall story and are even played for laughs at one point. Logan doesn’t have time to delve into ideas of alternative existences and whether or not battles with giant Samurai robots actually happened in its timeline – this is a personal story and one that succeeds cogently. 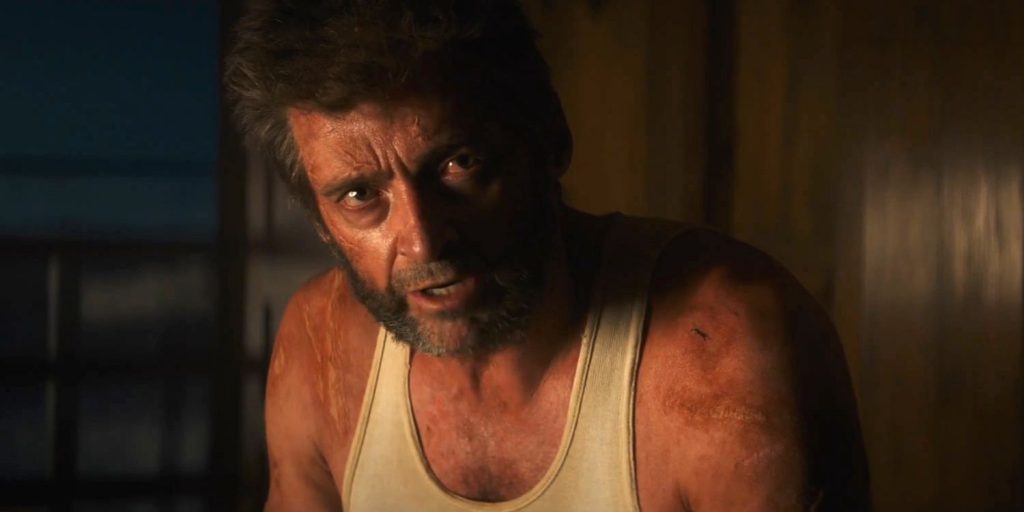 The always reliable Hugh Jackman provides a stellar turn as Logan, further perfecting a character that could have easily become a punchline in lesser hands (claws included). There is an ardent ferocity to his performance – both in actions and spirit. Now free of the PG-13 censor, we finally get to see the true terror of the berserker raging killing machine buried within someone who was once desperate to be nothing more than a simple man. Limbs, heads, and bellies get skewered graphically onscreen like never before in the franchise as he leaves behind hesitant, blood-raged massacres while futilely attempting to drown out hopelessness with booze and pain pills.

Patrick Stewart is absolutely heartbreaking and delightful as Professor X. Also unbound by the lower rating, he’s foul-mouthed, fragmented, and vulnerable, relishing every use of the word “fuck” as if passionately savoring a delicious, English muffin (with Earl Grey tea, no less). Always maintained as the ultimate beacon of hope in the X-Men films, here it radiates from him in every frame – a turn that’s all the more powerful seeing how low he has fallen. Pairing him up with Logan is a masterstroke. Their remarkable chemistry alone effortlessly elevates the experience as a whole.

Where Logan struggles, however, is a second act that does drag a bit and would have benefited from a tighter run-time – especially a couple of sequences where they hide out in a posh hotel and a farmhouse. What is it with comic book characters hiding out in farms lately, à la Avengers: Age of Ultron? Although an odd trend, it does come across more organically in Logan especially due to its contemporary Western ambiance.

Logan also features another mutant, Caliban (Stephen Merchant), who serves as a meek caretaker to Xavier and has the ability to sense other nearby mutants. Briefly introduced in X-Men: Apocalypse (although played by a different actor), he has “plot device” written all over him and his portrayal here is more tedious than engaging. Watching the film, I kept thinking of how much more effective it would have been had his caretaker been a graying Kelsey Grammer as Beast (playing up their character camaraderie from First Class, Days of Future Past, and the aforementioned Apocalypse) or a now blind Cyclops, adding a spice of antagonistic tension between him and Wolverine. More of a missed opportunity than an out-and-out flaw, it doesn’t negate the genuine blandness of Caliban whose very appearance and demeanor resembles an albino extra from Mad Max: Fury Road who was unfortunate enough to wander onto the wrong film set.

All in all, as a character piece, Logan excels. The family dynamic between Jackman, Stewart, and newcomer Keen imbues the film with a heart and drive unlike any of its predecessors. Easily one of the shining highs of the entire franchise and the best in the Wolverine solo trilogy, Logan stands as one of the most introspective comic book character portrayals in the last decade. If, as announced, it is to be the last appearance of Jackman and Stewart in the roles, one could hardly ask for a better sendoff. 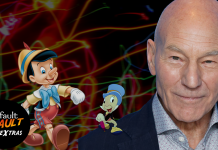