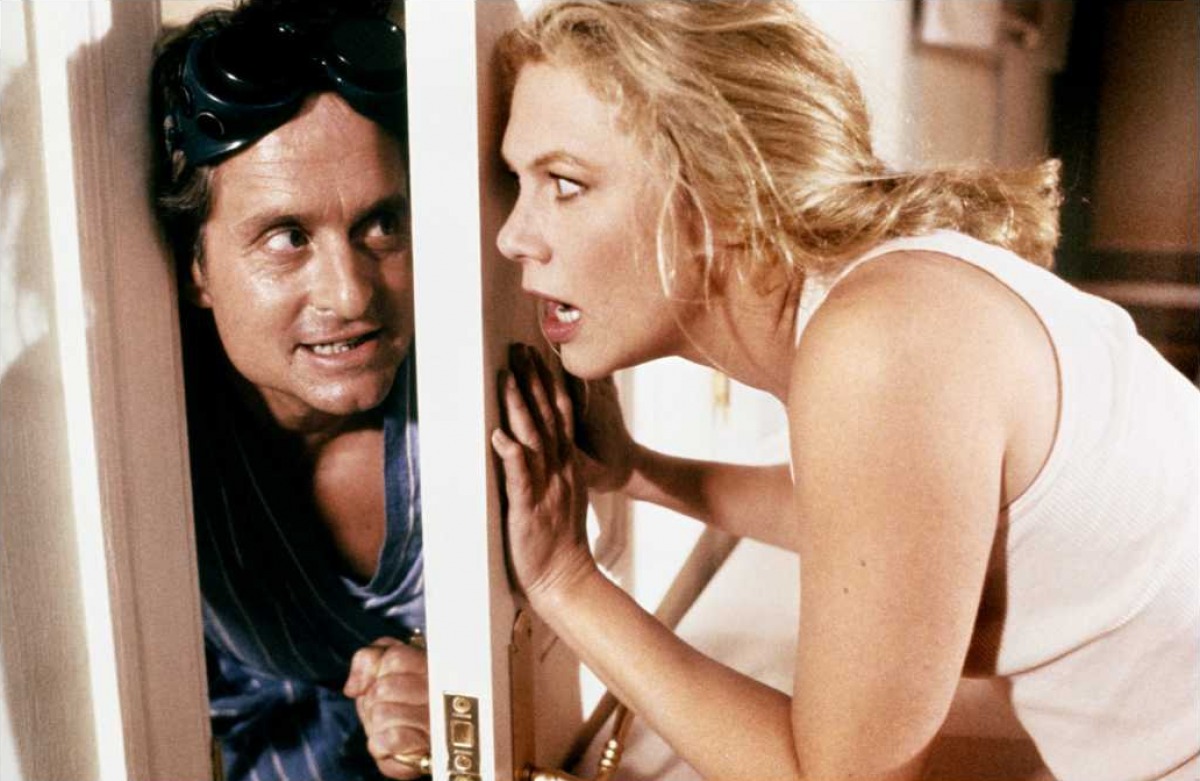 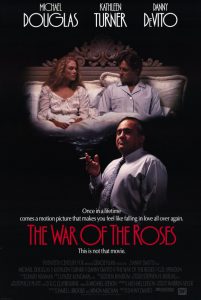 The War of the Roses is a black comedy that achieves something of an incredible feat. In a film starring Michael Douglas, Kathleen Turner, and Danny DeVito (all three reunited after appearing together in Romancing the Stone and its sequel, The Jewel of the Nile), DeVito is the one that comes across as the least despicable, most level-headed character! Playing a successful divorce attorney (in addition to directing the picture), DeVito sets the stage for the battle, told through flashback. “l won’t start the clock yet,” he tells a prospective client. “My fee is $450 an hour. When a man who makes $450 an hour wants to tell you something for free, you should listen.”

After a fairy tale wedding, Oliver (Douglas) and Barbara Rose’s (Turner) marriage slowly detonates beyond a rational point of no return – he’s self-absorbed and materialistic while she’s reticent and resentful.  When Oliver is hospitalized following an apparent heart attack, Barbara discovers the appalling truth that she no longer loves him after feeling overwhelming relief at the thought of his death. Divorce proceedings provide the layout for their battlefield – they both want ownership of their house and are willing to go to any lengths to get it, no matter how deranged, demented, or homicidal.

Describing The War of the Roses as black comedy is an understatement. A comedy delving into the realm of domestic abuse is certainly a daring if not uncomfortable prospect and one that the film compensates for by leaping into the safety net of screwball slapstick. When more realistic consequences peak through every now and then, they can be both unrelenting and galling as they quickly snap the audience out of their expected comfort zone.

Perhaps the biggest misstep is that the war itself is unbalanced. While Turner quickly reaches the apex of violence by trying to kill or maim Douglas in elaborate ways from locking him in a sauna, to dropping a chandelier on his head, or attempting to bite off sensitive portions of his body, he holds back due to his unmitigated  devotion to her. When she abandons him at the hospital following his heart scare and then, in what may be the slimiest, most cold-hearted moment in the picture, attempts to use his dying love letter to her as a statement of property possession in their initial divorce proceedings, you cannot help but pity the poor sap.  That’s not to say that he’s not an obnoxious character in his own right, but it does keep his character neutered from waging his side of the war between the Roses. When he does decide to fight back in-between his many attempts at reconciliation, the picture gains an energy akin to a Tom and Jerry cartoon complete with backflips down staircases, monster truck rallies through the neighborhood, and household traps that make the ending of Home Alone seem like a gentle trip through a fairground funhouse in comparison.

Michael Douglas shines in what is perhaps his most madcap performance. The biting intensity that he would bring to his better known thrillers such as Fatal Attraction, Basic Instinct, and his Oscar-winning role in Wall Street serves him well here as a bitter undercurrent, slow-boiling to the point of insanity from every emasculating turn by Turner. Turner plays it cold, inverting her romantic chemistry with Douglas from Romancing the Stone to display the exasperated role of a domineered woman breaking free from domestication.

Less battle of the sexes, more a battle of embittered, reprehensible lunatics, The War of the Roses proves to be strange, unsettlingly lively experience. With little sympathy afforded to our protagonists, all we can do is sit back and watch the powder keg burn to its eventual paroxysm, perhaps grateful that it didn’t cost us $450 per hour to enjoy.