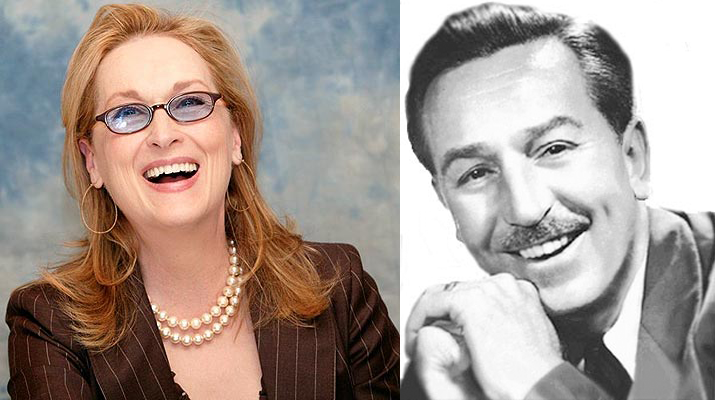 I wish I was just reporting on the latest “Epic Rap Battles of History” YouTube video but, alas, real life can sometimes be far more ludicrous. Last week, while presenting Emma Thompson with the National Board of Review’s Best Actress prize for her performance in the fantastic Saving Mr. Banks, acclaimed actress Meryl Streep used the opportunity to mount a baffling attack on Walt Disney with accusations of anti-Semitism, racism, sexism, and, ironically, ailurophobia (a person who detests cats). 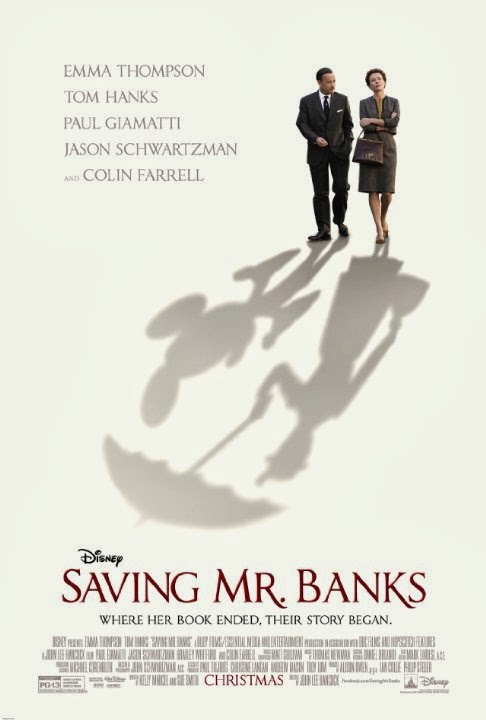 The edgy riff offered a different perspective on Disney from the sugarcoated hero played by Tom Hanks in “Saving Mr. Banks.” Streep was once rumored to be in the running for the role of P.L. Travers [played by Emma Thompson], although her remarks suggest why she might not have pursued the project.

“Some of his associates reported that Walt Disney didn’t really like women,” Streep said, quoting esteemed animator Ward Kimball on his old boss: “He didn’t trust women or cats.”

Streep talked about how Disney “supported an anti-Semitic industry lobbying group” and called him a “gender bigot.” She read a letter that his company wrote in 1938 to an aspiring female animator. It included the line, “Women do not do any of the creative work in connection with preparing the cartoons for the screen, as that task is performed entirely by young men.”

To be more specific, she was quoted as saying that Walt “had some racist proclivities. He formed and supported an anti-Semitic industry lobbying group. And he was certainly, on the evidence of his company’s policies, a gender bigot.”

In spite of my respect for the talented Meryl Streep, her attack on Walt, during an awards presentation of all things, was tasteless and disrespectful to a man who has been dead for nearly 50 years. Not to mention that her claims reek of misinformation and exaggeration.

It’s true that Walt was far from the irrefutable, saint-like figure that has always been portrayed publicly by the Walt Disney Company. In fact, he was a ruthless, shrewd businessman, a chain-smoker, and he named names during the McCarthy hearings. But he was also a product of his time.

Many of the more dubious aspects ascribed to Disney, such as Jewish caricatures in films like “The Three Little Pigs,” were considered the norm during his lifetime and largely accepted by society (however morally questionable). Walt cannot be solely held liable now, nearly a half century after his death, for the sins of his culture. That would be akin to demonizing George Washington and Thomas Jefferson for being corrupt, nefarious racists for owning slaves (which, to be clear, was something that was also considered the norm during their time period). In the same way, we cannot condemn Walt Disney by judging him in accordance with modern eyes and enlightenment.

In light of this, however, just how many of Streep’s accusations are actually true? Let’s begin with the oft-cited attributions of anti-Semitism. The instigating factor behind these accusations stem from Walt’s involvement with, and co-founding of, the Motion Picture Alliance for the Preservation of American Ideals in 1944 (the organization that Streep was referring to). While the group may have had its share of anti-Semitic members, its primary focus was to preserve the United States film industry against Communist and Fascist radicals. The Alliance’s statement of principles makes this quite clear:

As members of the motion-picture industry, we must face and accept an especial responsibility. Motion pictures are inescapably one of the world’s greatest forces for influencing public thought and opinion, both at home and abroad. In this fact lies solemn obligation. We refuse to permit the effort of Communist, Fascist, and other totalitarian-minded groups to pervert this powerful medium into an instrument for the dissemination of un-American ideas and beliefs. We pledge ourselves to fight, with every means at our organized command, any effort of any group or individual, to divert the loyalty of the screen from the free America that give it birth. And to dedicate our work, in the fullest possible measure, to the presentation of the American scene, its standards and its freedoms, its beliefs and its ideals, as we know them and believe in them. [The full text of the Motion Picture Alliance’s statement of principles can be found here.]

Walt’s involvement with the group may have been triggered by, among other things, his experiences with Herbert Sorrell a few years prior. Sorrell, whom Walt believed to be a Communist, was the primary instigator of the Disney Animator’s Strike in 1941. The strike discredited and smeared the Studio’s public image and Walt’s familial faith in his animators. Still bitter at the damage inflicted, it was no surprise that Walt would become involved with a Hollywood anti-Communist group. (Walt would later go on to condemn Sorrell at a hearing with the House Committee on Un-American Activities in October 1947 and, although it was never quite proven that Sorrell was indeed a party member, he did admit in 1953 that his activities were funded by the Communist party).

While accusations of an anti-Semitic agenda within the Alliance have been prevalent over the years, it seems that only Walt has suffered from the unsubstantiated burden of supposedly running a Jewish hate group. What is often overlooked are some of the other prominent members of the Motion Picture Alliance such as Ronald Reagan, Gary Cooper, Cecil B. DeMille (director of 1956’s The Ten Commandments), Victor Fleming (director of The Wizard of Oz and Gone with the Wind), Ginger Roger, and Barbara Stanwyck. Heck, John Wayne himself was the Alliance’s president for four years!

Furthermore, many of Walt’s longtime coworkers, associates, and family have defended him against these accusations. Tellingly, Robert Sherman (half of the brilliant Sherman Brothers who were responsible for the music of Mary Poppins and are featured heavily in Saving Mr. Banks) recalls in the book How To Be Like Walt: Capturing the Disney Magic Every Day of Your Life by Pat Williams with Jim Denney:

Walt was sensitive to people’s feelings…he hated to see people mistreated or discriminated against. One time, Richard and I overheard a discussion between Walt and one of his lawyers. This attorney was a real bad guy, didn’t like minorities. He said something about Richard and me, and he called us “these Jew boys writing these songs.” Well, Walt defended us, and he fired the lawyer. Walt was unbelievably great to us.

Still not convinced? In part for his contributions to Jewish charities, Walt was honored as 1955’s Man of the Year by the Beverly Hills B’nai B’rith chapter. What is B’nai B’rith, you ask? The oldest and largest worldwide Jewish organization established in the mid-1800’s with the primary aim of battling anti-Semitism.

Streep’s other big condemnation was the recital of a letter received by an artistic female applicant in 1938:

Dear Miss Ford, your letter of recent date has been received in the inking and painting department for reply. Women do not do any of the creative work in connection with preparing the cartoons for the screen, as that task is performed entirely by young men. For this reason, girls are not considered for the training school. The only work open to women consists of tracing the characters on clear celluloid sheets with India ink, and then, filling in the tracing on the reverse side with paint according to directions.

As incriminating as it sounds, it was just another sign of the times and an action that wasn’t limited solely to Disney Studio. In reality, this was a policy held by all the Hollywood animated studios during this period. Sure, the Disney artists were indeed mostly young men but this was also an age when gender equality wasn’t viewed with today’s liberated angle.

Despite this, the Disney Studios was not entirely a boy’s club and was uniquely progressive in its female workforce. While it’s true that the majority of the women did work in the Ink & Paint department, many would get promoted to other posts which did, in fact, include jobs in the supposedly male dominated animation, story, and music departments, as well as assistant direction. For example, one of the most renowned Disney legends from this period was the great Mary Blair. 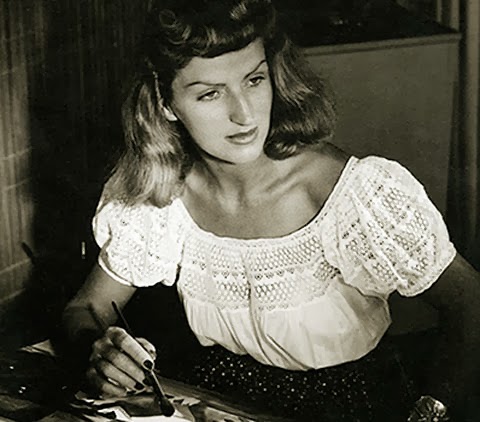 Among her contributions to the Disney Studio would be her work as an art supervisor on Saludos Amigos and The Three Caballeros as well as, more notably, her incredible concept art for films such as Cinderella and Peter Pan which helped establish the look and style of these particular films.

Perhaps the one sole grain of indisputable truth in Streep’s attack was Walt’s distaste for cats but can you blame him? His entire empire was built on the legacy of a mouse – mortal enemy and choice entree of felines the world over.

Yet despite his antipathy towards cats, Walt still found success in endorsing one of the most recognized cartoon kittens in film history with his own animated short cartoon series – Figaro from Pinocchio.

In the end, what is perhaps the most perplexing aspect of Meryl Streep’s attack is her inherent hypocrisy. After all, she took the odd opportunity to vilify Walt Disney in the same year that will feature the release of her latest film, Into the Woods – which she made for none other than Walt Disney Pictures.