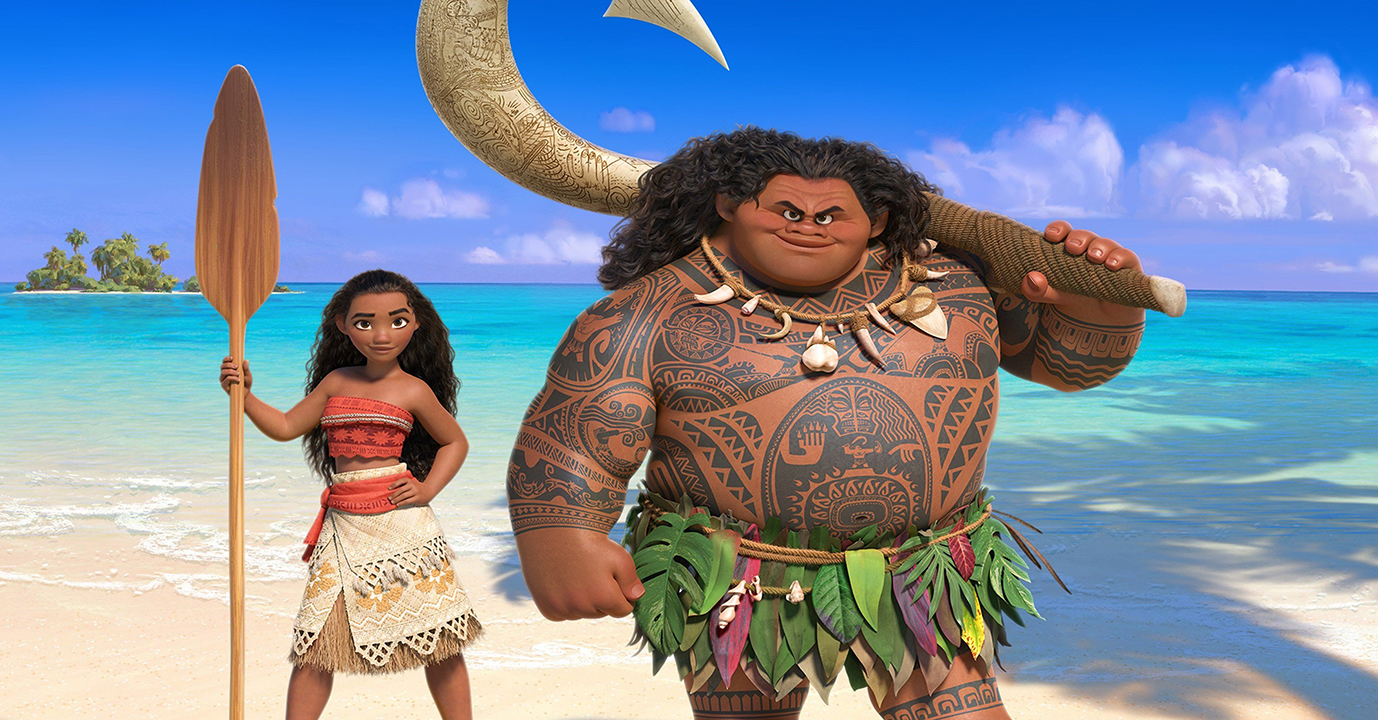 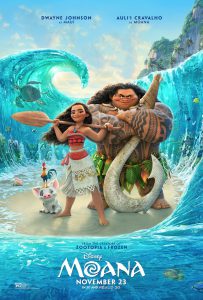 Moana, Disney‘s 56th animated feature, continues the resurgence that arguably began with directors Ron Clements & John Musker‘s (The Little Mermaid, Aladdin) 2009 musical The Princess and the Frog. Returning now for their first CG film, Moana hearkens back to the classic Disney Renaissance of the late 80’s/early 90’s. While it doesn’t quite live up to those earlier efforts, it is a fun visual treat and one of Disney’s best in recent years.

Moana (Auli’i Cravalho) is the daughter of a chieftain (Temuera Morrison) on the Polynesian island of Motunui, a cheery peaceful land that is being ravaged by a mysterious dark force killing its plants and wildlife. A self-proclaimed non-princess with a yearning for the sea, Moana sets out to save her people by finding Maui (Dwayne Johnson), a the legendary demi-god who stole the heart of Te Fiti, the mother island, a thousand years ago unwittingly unleashing the dark plague now engulfing their world. Together, they form an uneasy bond as they seek to restore the heart and battle vicious pirates, a realm of monsters, and a giant lava monster along the way.

Lacking the romantic angle that usually accompanies Disney musicals of this style, Moana has more in common with a buddy comedy with the clashes and eventual camaraderie between her and Maui providing the biggest laughs and pathos throughout the last two acts of the picture. Maui, and especially his creative interactions with his animated tattoos, is one of the most entertaining supporting humanoid characters in a Disney film in a while. Even so, he plays second fiddle to Moana’s journey which, despite its predictable and segmented nature, is adequately engrossing. Clashes with pirates and a journey to Lalotai, the realm of monsters, are fun mini-quests along this journey but feel like padding in the greater scheme of the story.

While the cynical side of me keeps noting that production for this film essentially went underway as Disney opened Aulani, a resort and spa in Hawaii (on Oahu, not Maui – there goes that bit of cross-promotion), such cynicism quickly erodes with its opening musical number introducing us to the colorful treat in store. The film’s most remarkable attribute, Moana is visually brilliant with an impressive array of colors, designs, and characters plus an ocean so beautifully rendered it makes me ache to book a Hawaiian vacation. If only I knew a good resort there… 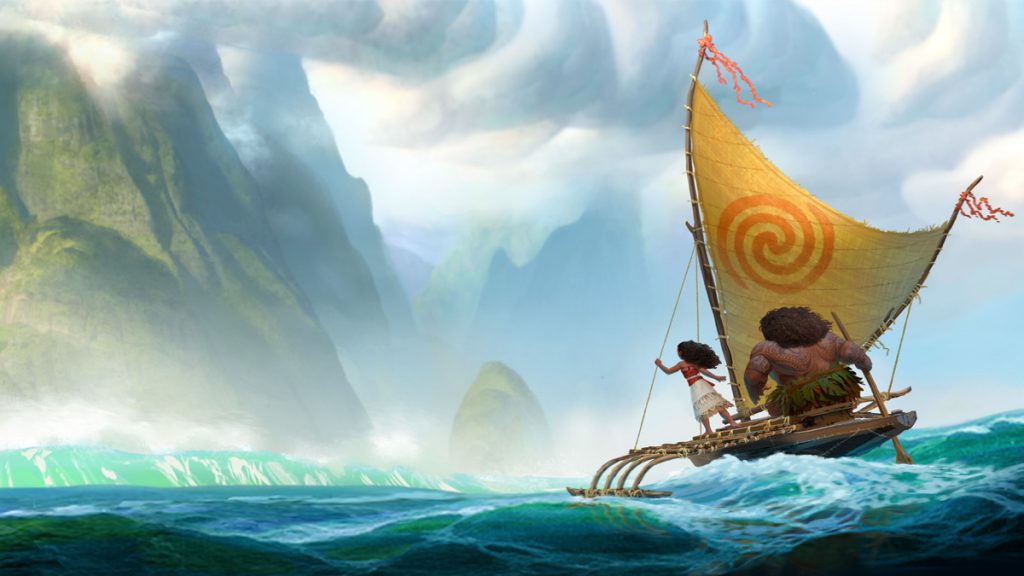 The songs, written by Opetaia Foa’i, Mark Mancina, and Hamilton‘s Lin-Manuel Miranda, range from good to wonderful with standouts being Maui’s fun “You’re Welcome” and the Grammy-pleasing “How Far I’ll Go.” While never quite eliciting the overpowering flurry of Tangled‘s “I See the Light” or Frozen‘s “Let It Go” (that is before repeated airplay implored me to let go of what was left of my sanity), “How Far I’ll Go” is memorable and sets the soul of the picture perfectly. Moana‘s voice cast is equally effective with Auli’i Cravalho making an excellent debut as the lead. The biggest (literally) standout is Dwayne “The Rock” Johnson as Maui with a surprising and highly absorbing vocal performance. And if there ever was a prize for portraying the world’s most scraggy, mentally challenged chicken, Alan Tudyk would walk away with a lifetime achievement award.

Although the film plays it very safe (probably due to Disney’s great fear of featuring anything that can be characterized as insensitive – a fear that has already played out in a recent Halloween costume fiasco), Moana is satisfactory and passably engaging despite some meandering. Despite falling short of the clever wit and storytelling of this year’s earlier effort Zootopia, Moana is good, harmless fun, sitting in good company with Tangled and Frozen as a lively treat and reminding us, in line with this week’s Thanksgiving holiday, that we should be thankful that Disney animation has returned to its grand musical ventures with imagination and style.